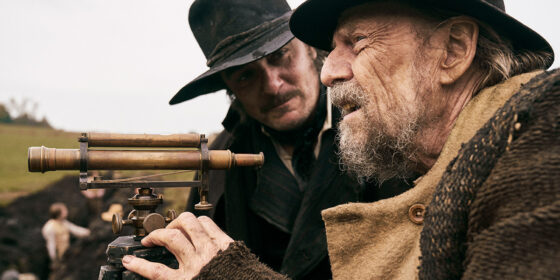 The latest from Michael Noer (Papillon) exists just on the right side of the dividing line between stodgy and well-appointed; in fact, it is so classically constructed in terms of plot and character organization that I was surprised to learn that it is based on an original screenplay (by Noer and Jesper Fink) and not adapted from a 19th-century Danish novel. One reason for this relative authenticity is that Before the Frost makes no ingratiating concessions to the contemporary viewer in terms of sensibility. This is a film about uniquely fin-de-siècle problems, even if they do pertain to a somewhat wider human condition.

Jens (the great Jesper Christensen) is a landowner who is down on his luck. Much of his large farm is marshland, and his latest wheat crop was a bust. So he is running out of options, not only for supporting himself, his daughter Signe (Clara Rosager) and his two nephews (Elliott Corsset Hove and Bertil de Lorenzi), but for maintaining his all-important social standing as a freeholder. In one key scene early in the film, Jens and his family are publicly humiliated by the parson in church, moved back a pew because they recently sold a cow, and so are no longer property holders in as good standing as the previous Sunday.

The film shows how, within this craven, petty class structure, there is a price on all human relations. It is also very clear, in an admirably ambivalent, novelistic manner, that motivations are never cut and dried, and that institutional structures place individuals at cross purposes with their own desires. So, as with Wuthering Heights or Madame Bovary, people marry for money, not love; distinctions between human and animal are erased; and lives are destroyed for the sake of property and status. But time and again, protests give way to resignation, if not outright embrace of the inevitable. As Dostoyevsky warned us, man is a creature that can get accustomed to anything, but Before the Frost suggests that doesn’t include the side-eye of public judgment. We will do almost anything to avoid that.