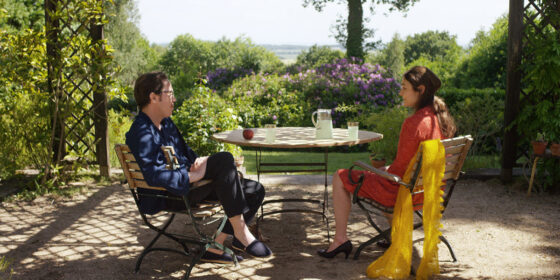 It seems that Wim Wenders has found his special medium, and, for better or worse, he will keep experimenting with it. After Pina (2011) and Everything Will Be Fine (2015), once again the German director employs 3D to frame his adaptation of a 2012 play by Austrian writer Peter Handke, his long-time collaborator. As this technique is used specifically to enhance our visual, nearly haptic experience of cinema, it’s natural to wonder why it would be applied to a film based on dialogue—to a movie of words.

Lou Reed’s “Perfect Day” opens the movie along with a series of panoramic pans through deserted, early-morning Paris. This and other songs played by an old jukebox punctuate the film as though dividing different acts (Nick Cave will later make an appearance performing “Into My Arms”). In a country house filled with books, a writer (Jens Harzer) gazes at his garden; against the green backdrop, a gazebo resembling a stage fills up with a man and a woman (Reda Kateb and Sophie Semin). As they start speaking, the writer begins typing, as if their performance and his inspiration are happening at once. What unfolds then is a celebration of the power of speech, a call for expanding on evocations and personal memories. Although the dialogue touches on different topics, the man centres his stories on the summer and its fullness. This theme—the fertility of nature and the beauty of the high season—is clearly in the air and carefully arranged in the setting. Perhaps the 3D technique is deployed with this intention: to bring us into the stage, recreating the direct experience we make in the theatre.

As the woman—sardonically urged on by the man—continues her tales about sex and love amongst men, the visual tones get darker. Paris’ skyline, which we can see behind the gorgeous valley in front of the house, pierces the screen with its urban noise. The final scene is an homage to both the Impressionist allure informing the mise en scène and modern visual techniques. But the gap stays. Words and images float apart.