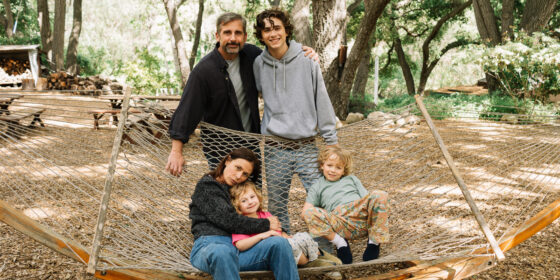 Beautiful Boy plays it safe with the details of the true story of meth addict Nic Sheff and his father, freelance writer David Sheff. At the same time, the movie risks danger with a time-jumping, memory-driven editing scheme that overlaps sound and image in ways that have generally been all but forgotten in commercial cinema. This is no more, and no less, than a case of an editor rescuing a project headed toward certain disaster. If an editor can write a movie, then Nico Leunen—who stepped in, broke down the material, and rebuilt it when director Felix van Groeningen realized that several previous edits weren’t working, and most likely realized that he should’ve been working with his regular editor all along—has written Beautiful Boy.

The first writer (not counting Cameron Crowe, who spent years trying to adapt David’s best-selling memoir and Nic’s own, titled Tweak) was Australian author Luke Davies, whose 1998 autobiographical novel, Candy: A Novel of Love and Addiction, about his experience as a junkie, would seemingly bring a sense of immersion and an authenticity that no research can buy. But it’s clear after several minutes that the movie isn’t nearly as interested in addiction as it is in the father-son bond. As David (Steve Carrell) watches Nic (Timothée Chalamet), showing flashes of writing and other talents, drop out of university and fall into addiction, he recalls sharing a joint with him in happier times. Yes, a movie in 2018 that suggests that pot is a gateway drug for the hard stuff. That, and Nic reading Charles Bukowski, the literary romance of dropping out and turning on. (Chalamet recites a lengthy Bukowski text over the tail end of the credits, so don’t walk out early.) Beware, young ones, of books and pot: the combination can be deadly.

None of this is especially interesting or convincing, and all of it repeats itself in a worked-over pattern of collapse/rehab/near-recovery/collapse. It may also prove to be frustrating for those looking for an explanation for Nic’s attraction to crystal meth; they’ll find nothing here apart for Nic’s comment that meth turns a black-and-white world into colour, even though this is a kid who’s grown up in with clearly loving parents in what’s just about the most gorgeous, sylvan, upscale woodsy, uber-Marin/Mendocino home in movie history (try topping this, HGTV). Even the potential psychological effects of being a child of divorce (Maura Tierney plays Carell’s recent artist wife, Amy Ryan plays Nic’s slightly testy birth mom) are barely alluded to.

The decision, whether by Davies or van Groeningen, to gloss over the horrors of the addict’s life is surely the strangest element of Beautiful Boy, even granting the narrative stress on dad’s memories. But this is where Leunen steps in and nearly saves the day. In ways that seem to deliberately recall another San Francisco-set movie, Petulia (1968), Leunen’s technique of overlapping present and past, most often with images and sometimes with sound, foreground the power and impact of memory on emotions, especially love. David’s drama isn’t really with Nic but with himself: the clash of those memories, the pleasant ones deep in the past, the troubling ones closer to the present, becomes a fascinating cinematic tone poem in itself. The actors do their thing, and well—Carell has gotten so good at drama that you almost forget that he used to be funny, and Chalamet plays tortured quite fully even if he’s showing the work too much—but the course of time as experienced by a father who must learn to let go lifts the movie out of its own mire.