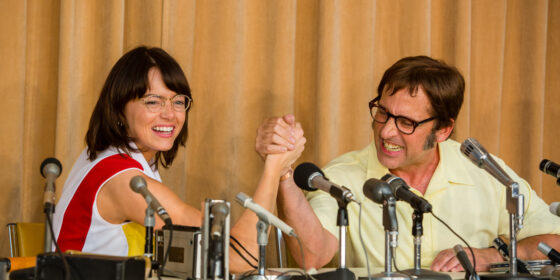 It is surely awards season and TIFF launch time when a spate of movies appear featuring real-life figures from the recent American and British past (because they must be Anglo-Saxon, just because they must), cast with stars undergoing striking physical transformations, art-designed with meticulous attention to period details down to the wallpaper and the correct cut of shirt, replete with the appropriate pop-song soundtrack…Well, you know these movies, the ones that first premiere in Telluride and then take the ride to the Great White North.

The batch of so-called Special Presentations this year includes Battle of the Sexes, the latest from the Little Miss Sunshine directing pair of Valerie Faris and Jonathan Dayton. For whatever set of reasons, it took this long for Hollywood to get around to a re-creation of the spectacular media circus that was the 1973 “Battle of the Sexes” tennis match between self-described “male chauvinist pig,” ex-tennis champ and full-time hustler Bobby Riggs (Steve Carrell), and the leading female tennis star of her time, Billie Jean King (Emma Stone). The casting is the movie’s strength, and both actors milk just about every drop possible from Simon Beaufoy’s strictly workmanlike screenplay.

Faris and Dayton also do a decent professional job, but without a trickle of inspiration or creating any moments that linger. The spectacle’s basic beats are all there, from King leading a boycott to form a separate women’s tour, to Riggs rising to challenge the nascent feminism in his sport, to King’s rocky road until her final match against the pig under the Astrodome lights. (There are even generous chunks of Howard Cosell’s delicious ABC Sports play-by-play.) So, too, are a bunch of soapier, semi-fictional domestic scenes that explore Billie Jean discovering her lesbian identity while in a fairly loveless marriage to a nice, supportive husband. Things are all properly in place, and they’re all so forgettable.