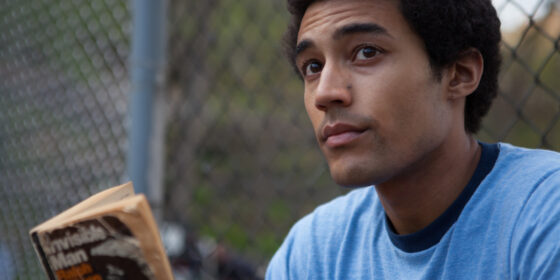 Among Barry’s most likable attributes is the fact that it barely even needs to be about Barack Obama, whose actual given name is never uttered over the course of the film. Set in August 1981, the loose narrative introduces us to its 20-year-old protagonist just as he arrives in NYC to study at Columbia. Directed by Vikram Gandhi from a script by Adam Mansbach, this is not a reverent presidential portrait: Barry’s first action is to light a cigarette; his first line of dialogue is “shit.” With his American mother and Kenyan father, his Jakarta-Honolulu-California trajectory, his sculpted features, his butterscotch skin and his unabashed intelligence that could be read as snobbery, Barry (played by Australian actor Devon Terrell, very deft at conveying an active inner life) is a fetching misfit, touring the city in search of milieu into which he might slip without much fuss. Whether trying to strike up conversation at a Harlem apartment party, reading Ralph Ellison at the basketball court, attending dinner at a private club with his white girlfriend and her affluent parents, or fending off territorial Puerto Ricans on the Morningside Heights block where he rents a dingy flat, Barry is a handsome phantom, someone who is never quite there in contrast to those surrounding him, who are busy keeping it real or at least taking up whatever token space Regan-era America allots them. Barry is articulate in his political science class but at no point in the film do we sense we are witnessing the realization of a future world leader’s grand sense of purpose. (Barry’s single most memorable line of dialogue: “Politics is bullshit.”) With its emphasis on a sense of place and all the ways a young person can feel out of place, Barry isn’t a biopic but, rather, a film about race, class, gender, and general tribalism in America.