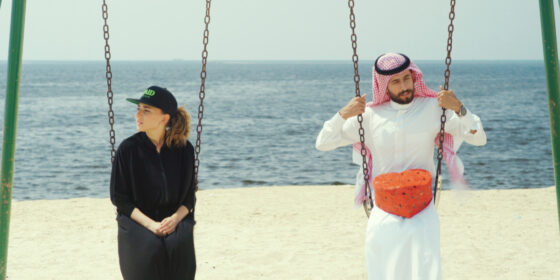 Belonging to a burgeoning new sub-genre known as “cinéma de selfie-stick” (or at least that’s what I’m calling it), the Saudi romantic comedy Barakah Meets Barakah has the temerity to tackle what most would, with a snicker, refer to as “How We Live Now.” Thankfully, this framework is used to present a new variation on the sort of Notting Hill-esque celebrity/Average-Joe romances Hollywood used to love trotting out 20 years ago. Seems that people everywhere miss the ’90s.

Of course, in 2016 we’re at the point where depicting a famous person onscreen means inventing not a movie or pop star, but someone with a million followers on Instagram. Bibi (Fatima Al Banawi), the adopted daughter of a wealthy couple, has attained this level of notoriety through a strategic revealing of her body, earning her the online label of “The Heavenly Thighs.” Her desire for something other than fame is matched by Barakah (Hisham Fageeh), a driver and aspiring actor she meets on a photo shoot. Yet brand-building still casts a shadow over their blossoming romance, like picking the best place to be photographed on a date night (shades of HiddleSwift, among other pop-culture power couples).

It’s all very cute, but the film’s trick comes in countering what could seem like didacticism by also taking aim at the trap of nostalgia for a “pure” age before one’s own experience (the same theme as Woody Allen’s Midnight in Paris [2011]). Barakah embodies an all-too common “I was born in the wrong era” sentiment (check Twitter’s search engine for evidence), unfavourably (and simply) comparing the current state of Saudi Arabia to his father’s seemingly more artistic and prosperous generation. Seriousness and sweetness coexist here, and it speaks to Sabbagh’s talent that he can finally administer such a light touch to a movie whose romantic leads so self-consciously bear the burdens of generational and national identity.