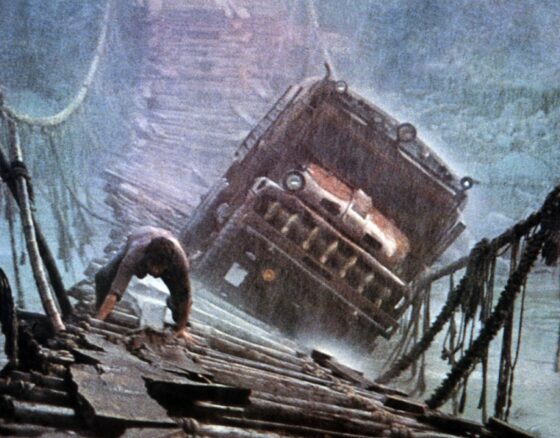 Despite its ruggedly physical mien, William Friedkin’s Sorcerer is a haunted movie, possessed by the unavoidable spectre of its smash-hit predecessor The Exorcist (1974). Even as he ostensibly disavowed the supernatural in what was originally intended to be a moderately-budgeted in-between picture before he embarked on a major production about the Bermuda Triangle, Friedkin—canny entertainer that he is—nevertheless did his best to keep the spirits raised, beginning with the film’s title: originally named The Wages of Fear (which would have overtly announced the film’s status as a remake of the 1953 Henri-Georges Clouzot classic), the film was subsequently redubbed Ballbreaker (which is a good name for a William Friedkin retrospective, if nothing else) until the director settled on Sorcerer to evoke “the evil wizard of fate” he saw hovering over his characters—which is sort of silly, but apropos for a film famously beset by all sorts of bad juju. The connections continue throughout the film’s entire first act: the opening titles play over the freaky visage of a Pazuzu-like demon, while the lengthy prelude to the South American-set action triples-down on the The Exorcist’s globetrottingly ghoulish five minutes in Iraq by offering up approximately two reels’ worth of footage filmed in Veracruz, Jerusalem and Paris, before touching down with a thud in the exotic climes of New Jersey. It’s not until the American leg of this opening-act journey that any English dialogue is spoke, and once again, the ghost of The Exorcist hovers: after all, if not for the earlier film’s record-breaking box-office performance, what studio executive in his right mind would have signed off on so many subtitles?

Sorcerer, of course, was the definitive opposite of an Exorcist-sized hit, becoming perhaps the preeminent casualty of the Summer of Star Wars—Friedkin’s equivalent of Apocalypse Now (1979), absent the subsequent critical and commercial reclamation. The Icarus-like trajectories of the Easy Riders/Raging Bulls crowd are familiar enough to preclude too much rehashing here, but suffice it to say that (as the received narrative has it) the “New Hollywood” brats, fuelled on the hubris of the artistic and financial capital earned by their earlier incursions into the mainstream, dreamed too big and were correspondingly brought low, some briefly (Spielberg, Scorsese), others more or less permanently (Coppola, Cimino). But where many of these directors have either disavowed or downplayed the elephantine films that threatened to (or in fact did) crush their careers, Friedkin has stuck to his guns on Sorcerer, claiming that it is “one of my only films that I can watch, because it came out almost exactly as I had intended.”

In outline, Sorcerer was an ideal Friedkin project: an extended homage to a beloved genre classic whose blend of state-of-the-art suspense and existential dread (with a soupçon of anti-corporate social commentary thrown in for good measure) was right in the director’s wheelhouse. Friedkin being Friedkin, he made the political personal: an insert shot of a photo of the board of directors of the film’s rapacious oil company actually shows the board of Gulf + Western, then owners of the very studio that was bleeding money every day that Friedkin’s movie was soaring above its budget.

While this is not much more than a sight gag, it proves crucial to understanding the movie as a whole. If Sorcerer has a philosophy, it’s “insult to injury”: in the sequence that introduces Roy Scheider’s mob wheelman Ray Scanlon—whose gang is planning to knock over a Catholic church in the middle of a wedding— Friedkin cuts to the happy couple at the altar, the bride sporting a black eye. If botching the heist and fleeing to the (fictional) South American village of “Porvenir” is Scanlon’s punishment for stealing from the collection plate, there’s nothing especially divine about it: the men on his tail work for the same species of lowlife that previously employed him, except they happen to be affiliated with the church. The only reason that Ray is of more dramatic interest to us than the other men introduced in the film’s multiple prologues—assassin Nilo (Francisco Rabal), terrorist Kassem (Amidou) and crooked banker Manzon (Bruno Cremer)—is because he’s played by an American movie star, and if Scheider looks out of place among the peons in his adopted home, that’s part of the joke: in Sorcerer’s funniest moment, he tries to convince a local cop that his name is really “Juan Dominguez,” proffering some pathetic Spanish before being rousted from the bar.

The decision by Friedkin and screenwriter Walon Green to dramatize the circumstances that led to their protagonists’ arrival in Porvenir is defensible on a number of levels: to create a sense of disorientation for the audience, to endow the characters with easily recognizable traits that they can display later on, and to nod towards the political tensions of the period (Kassem’s fellow bombers are captured by Israeli police). Even so, it feels mostly like Sorcerer and its director are showing off, jetting around the world to create four short scenes that cumulatively tell us little more than that these are bad, desperate guys— something Clouzot achieved in The Wages of Fear in a few lines of dialogue and some decisive casting choices.

Sorcerer is fascinating on two levels, then: as the work of a filmmaker riding a wave of success, and also of a movie brat measuring himself against one of his idols. Where it fails, however, is in the more prosaic department of actually being a good movie. Like so many of those ’70s-vintage white elephants, it’s a film that invites critical heavy lifting to compensate for its inability to stand on its own. The sequences showing Scanlon and the others acclimatizing to life in an economically depressed backwater feel like just so much goldbricking en route to the main event: the perilous two-truck convoy across 200 miles of jungle terrain, with unstable nitroglycerin as their payload. There’s no substance to the film’s disgust for the oil company, and a scene where the indigenous victims of a massive oil fire are passed between the townspeople in body bags is the worst sort of grandstanding: it’s grotesque, hectoring and immediately disposable, a mere prelude to the automotive melodrama.

Where Friedkin excels—where he may in fact be peerless—is in showing exactly how the gimmicky confrontations and contraptions in his movies work: a car chase, an exorcism, or, in the case of The Hunted (2003), the forging of homemade weapons. In Sorcerer, while the woozy Tangerine Dream-scored montage of the men souping up their trucks is a little too mystagogical, the film’s two most famous set pieces are fabulous: the improvised dynamiting of a massive fallen tree, and the perilous negotiation of a swaying, rain-swept rope bridge. Bud Smith and Robert K. Lambert’s cutting of these sequences prove that virtuosity isn’t always a matter of velocity: both are organized around an agonizing incrementalism.

It’s easy to over-romanticize the physical effort that went into these scenes in an age of quick-fix CGI solutions, but understating the case won’t do, either. No less than Herzog’s Aguirre, the Wrath of God (1975) or Fitzcarraldo (1982), Sorcerer endures in part as a document of filmmakers triumphing over the elements right along with their characters. One difference (among many), though, is that Aguirre and Fitzcarraldo—and, while we’re at it, Apocalypse Now—strive to fill out gargantuan historical and literary conceits, whereas Sorcerer is trying to inflate something which is at its core lean and mean into an overbearing statement about crime and punishment. How else to read the scene where Cremer’s reptilian embezzler—whose last act on his home turf is to berate his business partner into committing suicide—gazes longingly at the watch we saw him get as a birthday present from his wife just before hitting a bump in the road and blowing himself sky high? In Clouzot’s movie, the lack of clear context about these men and what they’ve done allows the actors to make them into tragic heroes of a sort, but Friedkin shows us exactly what’s on their consciences, and thus shifts the tone from suspense (not knowing what’s going to happen) to dread (waiting out the inevitable). Another example: when Scanlon and Nilo are stopped by gun-toting rebels a few miles from their destination, we know not only that the scene is going to erupt into brutal violence, but that Scanlon at least will escape unscathed, both because of movie-star politics and because dying meekly by the side of the road wouldn’t be nearly a grand enough resolution.

In this, Friedkin is merely following Clouzot’s lead, and yet the detour he takes at the very end is also telling. In The Wages of Fear, lone survivor Yves Montand can’t help taking a fast corner after he’s already in the clear, the same steady hands that guided his vehicle to one finish line ironically hurtling him towards a more ultimate one. In Sorcerer, though, it’s Scanlon’s past that does him in, and with the sort of precise bad timing that indicates a filmmaker playing his trump card: the bad guys interrupt a slow dance. It’s the final anti-grace note, and yet this bottom-heavy movie’s attempts to lend itself some heft don’t amount to much; it’s featherweight existentialism. In trying to lower the boom, Friedkin doesn’t do much more than break his characters’ balls, and ours too.