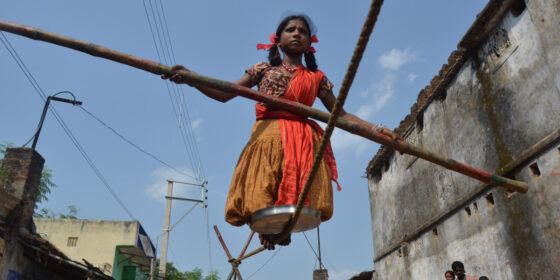 The West Bengali auteur Buddhadeb Dasgupta is sufficiently ignored in the West so that his new movie, The Bait, isn’t listed among his 35 director credits at IMDb. Before watching it at TIFF, I would remark to friends, cinephiles, and fellow critics that I was “about to see the movie by Dasgupta,” and, without fail, drew blank looks. While there’s some awareness of his remarkable body of work outside of the subcontinent and the Indian diaspora in East Asia, he remains stubbornly little-known elsewhere. TIFF (and the London Film Festival) is an exception: It has screened six of his previous features, including one of his most memorable and lasting, Chased by Dreams (2004), as urban as the new movie is rural.

The reasons for his obscurity partly have to do with Indian cinema, which has been on the outs for a long time on the international festival circuit. Dasgupta, like the Kerala-based Adoor Gopalakrishnan (director of the excellent Shadow Kill whose Once Again is at this year’s TIFF) operates far outside the Bollywood system, isolating him even further from global awareness. It won’t help that The Bait is far from Dasgupta’s best work, straining and yanking and sweating its way through a tale (adapted from a short story by Narayan Gangopadhyay) that functions as if magical realism were some new aesthetic discovery.

Like much Bengali fiction, the tale interlaces the fates of rich and poor. On one end is a raja living in a sprawling mansion and trying to woo his spoiled mistress with stuff. On the other is a small family of traveling performers whose star is a young girl who wows village crowds with her impressive tightrope act. In the middle is a peeved postman who has retreated to sitting in a tree and reading the mail, resembling a bureaucrat deposited into the world of Le petit prince. The raja gets it into his head to hunt a tiger that has been disturbing locals, hiring a film crew to record his trek. His big idea is to make slippers for his mistress out of the tiger’s hide, hopefully winning her over for good.

The staging, set mostly outdoors against carefully selected landscapes, comes off as faux Fellini, or a far gentler and harmless variation of the surreal landscapes of Vimukthi Jayasundara. Dasgupta’s regular sense of humour is intact, but his comedy is forced, with the original story’s anger replaced by whimsy. The raja, more or less, gets his way, but because of Dasgupta’s choices in framing, staging and casting, any shock is dulled by a sensibility—this time around—where realism is outweighed by a cute form of magic.