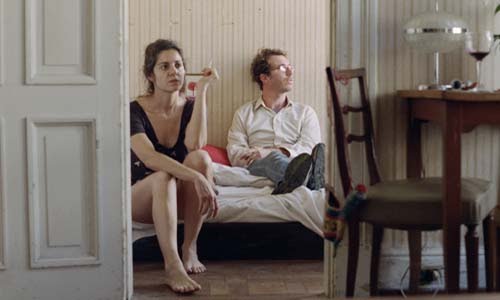 The BAFICI critic be damned. Again. When it seemed that the preeminent South American festival’s stronghold might yield to ongoing budget constraints and a native indie market suffering from insularity, the 13th edition of BAFICI proved resilient in its capacity to curate another vast and dynamic rejoinder to the implicit critical stance of how (rather than what) is cinema? “Judge for yourself,” the program seems to retort, offering up a surfeit of evidence capable of humbling, beguiling, or downright exhausting the spectator—all in a day, of course.

The critical task was enviable on paper but hazardous in reality, fit for the insatiable, obsessive, or insomniac viewer. Or perhaps, in the case of Jorge Mario, subject of the Argentine competition entry Amateur (Nestor Frenkel), it’s a matter of mere priorities. A seventy-year-old dentist from Entre Rios, indefatigable Jorge is an avid stamp collector, shooting enthusiast, radio show host, founder of a Boy Scout troop and, as Amateur reveals with charming sincerity and alarming irony fitting of its subject, veteran viewer of some 17,000 films, each fastidiously catalogued (while his mother fixes lunch, naturally) in an antiquated home database that prefigures IMDb and the web-educated film critic.

That he can recall disliking only one film makes him honourary among critics; that he is director of a dreadfully good forty-year-old Super 8 western called Winchester Martin and actively pining for yet another remake with his disinterested, ageing pals makes him something of a cult auteur. Flip to page 478 of the festival catalogue and improbably you will find, within a section devoted to Super 8 films, a scheduled screening of the original five-minute Winchester Martin and, well, one’s suspended sense of disbelief á la Errol Morris has shaded into the Borgesian uncanny. BAFICI meets its theoretical audience of no one by way of a feature documentary about a compulsive cinephile; offers an homage screening of his film within the film in return. At the least, BAFICI might be described as radically elastic.

Less insouciantly diverting were the handful of Argentine competition films I caught while attempting to track down the likes of Rotterdam Tigers and Locarno Leopards and Berlin Bears. While Martin Rejtman was teasingly present with a cheeky festival trailer of inverted yogis’ pained/comic faces, his influence could be felt in Rodrigo Moreno’s Un mundo misterioso (A Mysterious World), down to its aloof protagonist (name: Boris), dumped by his girl in the film’s first frame, subsequently adrift in the capital and without identity save for a diminutive car that’s a kind of emotional equivalent (it’s a Renault knock-off, and it breaks down). Boris weathers a series of minor indignities and fortuitous encounters with a kind of sleepwalker’s charm and luck, consistent with the dreamy banality that is the mystery of Moreno’s not-so-mysterious world. The film plays out like an old tango or jazz LP on its last groove while an amicable mechanic eats a pasta dinner in his garage. The air is not serious, the mood just slightly melancholic. And yeah, echoes of Silvia Prieto: that’s Rosario Blefari with a thing for casinos… 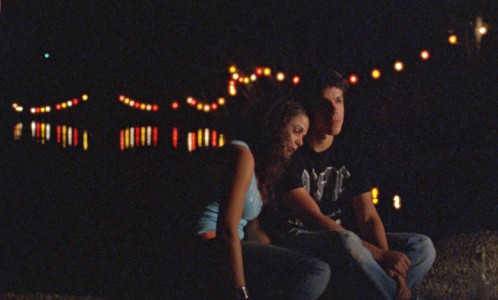 Matias Pineiro, emerging from obscurity last year with Todos mienten (They All Lie), chimed in with a 40-minute piece solicited as part of the Jeonju Digital Project (alongside fellow “Americans” Denis Côté and James Benning). Rosalinda transplants Shakespeare’s As You Like It to the lush Delta Tigre, and those unfamiliar with the pastoral romantic comedy (uh, that would be most of us not in college anymore) can find refuge in the repartee (Pineiro’s strength, however borrowed here) and its forested choreography of entangled lovers wandering. Hermetic yet beautifully crafted, and transfixing if you’re on the Bard tip.

Las piedras, which won Román Cárdenas the Best Director prize for the Argentine competition, made equally good use of its Delta setting, though it’s hardly prolix in its studied attempt to lay bare a failing relationship (their pilot light won’t stay lit). He, a writer, is given silent passages gliding down the Delta in a kayak. She, an accountant at a fumigation service, is saddled with an odd storyline involving an anonymous fumigator that seems derived from one of Tsai’s more absurd conceits. While waiting for a new refrigerator, he shaves his beard and head and inexplicably adjourns with a friend on a scooter to a remote fishing outpost by day and then a discotheque at night, finding some kind of solace in New Order’s “Blue Monday.” The goofy dance sequence is probably the film’s highlight—and possibly the best use of New Order as a loneliness panacea since the finale of Rejtman’s Los guantes magicos (The Magic Gloves, 2006)—but like last year’s Lo que mas quiero (What I Love the Most, Delfina Casagnino), Las piedras, while possessed of good grammar, feels insufficiently realized.

Based on the strength of his collaboration with Santiago Loza on last year’s Los labios (The Lips), expectation was high for Iván Fund’s Hoy no tuve miedo (Today I Felt No Fear). Fractured and impressionistic, and boasting some tight camerawork that earned the film a cinematography award, Hoy is a diptych that favours immersion over characterization, suggesting a coming-of-age story among two sisters in its first part while hewing toward documentary in the latter (film crew included). Fund is content with disclosing minor occasions as formative—party dresses sewn, dogs washed in bathtubs, girls smoking on scooters, sunrises and sunsets, music, photo albums—his approach defining family as a force felt in absentia, experienced obliquely; any points of identification are generalized by ambience rather than localized by story. Compelling work from Fund, but it’s unlikely to get him another invite to Cannes.

I missed eventual Best Film winner La carrera del animal (Animal’s Run, Nicolás Grosso), though over in the International Competition another Argentine entry about carreros would become the festival revelation. Yatasto (Hermes Paralluello), developed in last year’s BAL (Buenos Aires Lab for works-in-progress), literally hitches its camera to a horse and cart to track the daily ride of three young cartoneros scavenging garbage on the outskirts of Córdoba. Yatasto—the name seems to refer to a famous Argentine thoroughbred—dignifies the labour of the three rascally cousins through patient observation, as they bounce and talk along their route, all too often holding up traffic, their haul occasionally spilling into the street behind. The film is about labour, but Paralluello never takes the expected self-aggrandizing stance towards his subjects: this a formally precise documentary about a way of life that leaves ample room for “meaning” (social, economic, familial) to gather while insisting on little more than the metronomic click of horse hooves on pavement. Where the horse and wagon of Meek’s Cutoff (2010) cuts an infinite line through the landscape (I’m still trying to get my head around the film’s spatial configuration, much more so than its historic evocation), and Béla Tarr’s titular Turin horse (Nietzsche’s angel, or devil?) charges steadfastly along in an unforgettable tracking shot, Yatasto rather economically yokes its mise en scène to the carreros’ ride itself, backwards looking, all but dissolving the self-conscious or choreographic aspect of the reverse moving shot (see Robert Koehler’s dialogue with Fred Kelemen in the Cinema Scope #46). Here’s looking forward to repeat viewings of Yatasto, ideally with English subtitles in tow.

Which brings us to the curious question of just who is holding the camera in the films of Andrei Ujica, an inspired choice for one of BAFICI’s retrospectives given the colossal achievement of The Autobiography of Nicolae Ceausescu. Videograms of a Revolution (1992), made with Harun Farocki, offers an exceedingly visceral counterpoint to the pomp and ceremony of Ceausescu’s march toward total power (that Autobiography plays like an incidental death fugue is part of its resonant, retroactive power). Videograms is precisely that: anonymous video dispatches from both amateur and state from the front lines of Bucharest in the midst of revolution. Such footage created not only a new precedent for film’s capacity to faithfully capture the historical moment, but a means to inform its very unfolding. Videograms is at once blisteringly live and non-sensational in its absence of production; if the ubiquity of the image in today’s hyper-information culture has inured us to the causality of history, Ujica and Farocki’s act of appropriation awakens us to a time when it wasn’t so (while presciently anticipating the public revolutions in Egypt, Tunisia and elsewhere, all quite televisual).

Out of the Present (1995), Ujica’s second film, archives the Soviet voyage into space while simultaneously the Socialist republic crumbles on the street. And again it is the embedded camera, in this case actually floating, that unwittingly testifies to the moment as it is crosshatched by historical forces. As a space odyssey alone, the film offers an astonishing scale of the intimate/epic and national/personal, elongated by the footage of tanks rolling into Moscow and being stoned by dissenters. From zero gravity to the weight of revolt—the disparity needs not coaxing but context, and Ujica’s careful presentation suggests that, politically speaking, consensus is a mythical construct, that all too often we are worlds apart. Cue some thumping ‘90s disco beats and Ujica’s construct spirals into an amusingly anachronistic orbit. 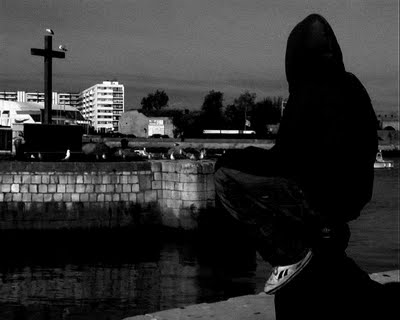 For all the forays afforded by BAFICI’s vast and varied terrain—Tsangari’s ATTENBERG, Kohler’s Sleeping Sickness, Jose Maria de Orbe’s Aita, and Emmanuelle Demoris’ Mafrouza series persist in memory particularly—it was the relatively unknown/unseen work by Sylvain George that took the program by surprise. Qu’ils reposent en revolte (Des figures de guerres)/May They Rest in Revolt (Figures of Wars 1) confronts the issue of immigration in Calais, the northern French port that serves as a gateway to England for illegal immigrants. George documented random subjects and encounters over a three-year period from 2007 to 2010, culminating in the much-publicized bulldozing of a settlement by French police that was home to hundreds of asylum seekers. The film is in essence an act of vigilant protest, a cumulative exposure of marginalized peoples and the liminal space they inhabit. In one sequence, George shoots from within the brush along a notorious highway where migrants attempt to fasten themselves below freight trucks. Unlike Philippe Loiret’s dramatization of the subject in Welcome (2009), George’s treatment is scarcely sentimental, though not lacking in lyricism: the coarse black-and-white photography fixes on birds in flight, beach foam, and plastic H&M bags snared in the thicket when not tracking subjects in rest, during meals, or increasingly taking flight. One particular image synthesizes the political and the aesthetic: refugees’ hands repeatedly burned and scarred to smear any trace of prints. It’s a striking symbol of effacement and dispossession that cuts to the core of a universal issue of “newly damned” populations. Deserved winner of the International Official Selection and the FIPRESCI award, George’s film was enough to distract one from a sidebar of later Godard burning up a screen nearby.