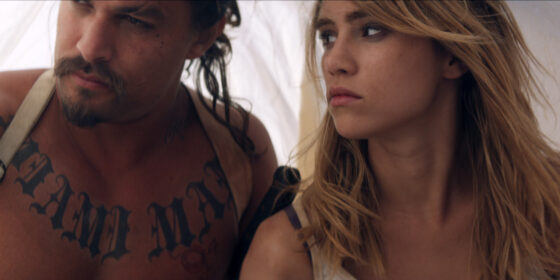 In the future and/or some parallel universe, the US will reject numerous citizens for unspecified reasons and banish them to some arid stretch of Texas-Mexico borderland. On one side of this desert of the forsaken is an airplane graveyard where elaborately tattooed bodybuilders glisten in the sun while the limbs of less puissant outcasts sizzle on the griddle. On the other side is a chilled cult compound where people don’t eat people and skimpy cameos abound: Diego Luna spins records inside a Rust Never Sleeps-size boombox, Keanu Reeves gets all the young ladies pregnant and, God help us, Giovanni Ribisi stumbles around babbling like Bobcat Goldthwait. Movement between these camps is dangerous; only Jim Carrey’s sundried shopping-cart scavenger gets a tacit wasteland hall pass and is thus able to wander without fear of cannibal assault. He’s the aspirational model for The Bad Batch’s heroine (Suki Waterhouse), a pretty young cypher who lost an arm and a leg escaping from the former camp and opted not to drink the Kool-Aid in the latter. Suki just wants to be alone, or she did before she met Jason Momoa’s sensitive cannibal hulk searching for his daughter. He may have feasted on Suki’s femur a few weeks back, but that doesn’t mean these two can’t forge a makeshift family.

Where Ana Lily Amirpour’s undeadpan feature debut A Girl Walks Home Alone at Night (2014) exuded a certain hip austerity, her follow-up is much more the go-for-broke mash-up. So low-key it’s nearly no-key, Bad Batch’s design is far more curational than dramaturgical, allowing Amirpour to fuse hazy memories of The Hills Have Eyes (1977) and the denouement of A Boy and His Dog (1975) with a perverse penchant for Ace of Base. Some of this is quite charming or clever, and none of it has any momentum whatsoever. One gets the distinct impression that we’re not supposed to care, and by the meandering third act we dutifully comply. The finale fizzles away in the desert heat and we’re left to gnaw on the implication that we are beholding the peripheral zone of Trump’s America, where ruthlessly exclusionary policies leave undesirable citizens literally feeding off each other.