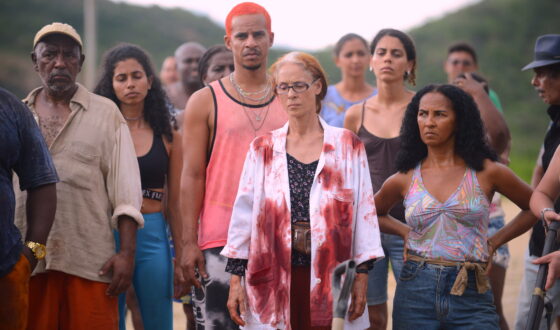 Kleber Mendonça Filho’s ongoing quest to sound out the tensions of contemporary Brazil takes a turn at once more strident and more oblique in Bacurau, an exhilaratingly jittery mash-up of genres and moods co-directed with Juliano Dornelles, the production designer for his two previous features. While the unlikely surface attractions of this third trip to the Brazilian northwest include flying saucers, a school named after a certain “João Carpenterio,” and a snarling Udo Kier, there can be no denying the film’s political intentions, as a line in the sand is drawn between past and near future that neatly skewers the present along the way.

Even before Teresa (Bárbara Cohen) arrives back home in Bacurau for her grandmother Carmelita’s funeral, her journey in the local water truck has been rich in portents of what lies in store for her and her village, whether it’s the dead motorcyclist and pile of broken coffins strewn across the road following an accident, the trigger-happy guards at the government-built dam that has amputated the water supply, or the wanted ad on the truck’s gently futuristic music system calling for the arrest of transsexual local bandit Lunga (Silvero Pereira). Once Teresa finally arrives, Carmelita’s send-off is already in full swing, a heady, conspicuously well-attended affair that blends sorrow, celebration, affirmation, and song, with only an inappropriate emotional outburst by the town’s doctor, Domingas (Sonia Braga), now the village’s remaining matriarch, breaking the trance-like atmosphere.

More scene-setting duly follows: Teresa reconnects with her family and hooks up with robber Pacote (Thomas Aquino), now going by Acacio thanks to his internet infamy; a group of prostitutes turn up in their trailer and start unabashedly plying their trade; and larger-than-life mayor Tony Jr. (Thardelly Lima) arrives bearing dubious gifts in hope of securing the village’s votes. With the various colourful characters and focus on local rhythms, the mood seems at first glance not so very far from some sprawling Latin American Boom-era literary opus, whereby Bacurau and its people serve as an embodiment of the issues of the time.

While this function will indeed be performed, the prevailing mood is always being gently contaminated by other tenors and motifs, whether the various technological advances that place the action “a few years from now,” or the hallucinatory atmosphere that overtakes the action from time to time, such as when horses stampede through the village by night or Teresa sees water spurting forth from Carmelita’s coffin—even if the latter is due in part to the mysterious seeds placed in the villagers’ mouths. The latent instability is only heightened by the shifting perspectives from which events are shown: in the funeral sequence alone, the camera jumps between Teresa’s point of view, that of her father Plinio (Wilson Rabelo), and that of the mass of villagers, while also sporadically alighting on the man in sunglasses providing the soundtrack with his guitar before eventually stepping ever further back into the landscape to observe the entire crowd swirling white handkerchiefs before the grave from afar.

Before long, some equally unorthodox perspectives are being brought to bear on the narrative directly, such as when Plinio tries to show a group of schoolchildren the precise location of Bacurau on the internet and realizes it is no longer to be found, with one of the villagers being trailed by a mysterious drone in the shape of a flying saucer shortly afterwards. Soon there are bullet holes in the water truck, a pair of apparent tourists on quad bikes asking suspicious questions, and some first, bloody casualties. As the flying saucer reappears overhead to watch two village scouts get dispatched, the camera takes on its point of view and follows it back to base on the outskirts of the village, where a group of multinational English-speaking mercenaries led by Michael (Kier) are holed up, their mission to expunge Bacurau from the map.

Yet this shift onto the “enemy” perspective, which appears to be riffing on The Most Dangerous Game (1932), hardly makes things any more stable. Michael and his motley crew conspire to pick off the surrounding dwellings and cut off power to the village, Pacote recruits the help of Lunga and her gang to protect Bacurau, and ever more genres, tones, and references now jostle for attention, whether local or international, present or past, distinct or interrelated.

While there’s no less novelistic detail in how the village is portrayed, its inhabitants’ efforts at self-defence are reminiscent of the sort of final stand familiar from the films of the American director whose bastardized name in Portuguese adorns the school, or even the fate of the rebel Canudos community in 1890s Bahia. (Kier’s almost comically unhinged performance suggests a low-rent thriller even blunter and more hard-boiled than those by John Carpenter.) The Western and its associated frontier freedoms are equally present (most self-consciously when the quad bikers are greeted as cowboys), a genre that is at once the antecedent to much of Carpenter’s oeuvre, which is itself tipping its hat at Howard Hawks, and cousin to the specifically Brazilian cangaço narratives of banditry in the northwest in the late 19th and early 20th centuries. And the technologies employed by the mercenaries to take down Bacurau mine a tongue-in-cheek brand of science fiction, albeit one that is frighteningly close to the present.

While the elements of each of these references carry certain expectations, the way in which the film combines or shuffles between them creates a feeling of constant unpredictability, as one can never be sure which rules currently apply and how or when they might be supplanted by others. In this sense, if Bacurau is a genre film, it’s one whose tension relies most on the fact that genre can no longer be relied upon. The unpredictability of these genre shifts is only amplified by the same reversals in tone or perspective already discernible from the beginning, which become increasingly jarring as the film progresses, producing an off-kilter, anything-goes atmosphere that is still careful to stop just short of the incoherent or the arbitrary.

Two members of Michael’s troop thus gun down a husband and wife fleeing the village with an entirely unnecessary number of bullets, enjoying the afterglow with some ridiculously overblown celebratory sex in full view of the drone’s camera, while the high drama of the moment when Michael and Domingas meet is undercut by Foreigner’s “I Want to Know What Love Is,” a typically left-field musical choice. In the town of Bacurau, horror, humour, violence, mercy, community, and vengeance are somehow natural bedfellows, if still uneasy ones.

With its messy clamour of contradictory voices, influences, and virtues that still somehow hold together, Bacurau’s very composition seems to be echoing the feel of Brazil today. Yet this is by no means the only comment on the state of the nation, as it’s not just any fictional village that is to be erased from the map, but rather one constructed with values in mind that correspond to a slyly utopian view of the country. Regardless of the future setting, it’s no coincidence that the church is only used for storage, sexuality is conducted with total matter-of-factness, diversity is the norm, positions of power are occupied by trans people or women, politicians are viewed with distrust (if not outright scorn), and the past is kept very much visible in the form of the prominently placed Museum of the History of Bacurau, which just so happens to be the location where all hell finally breaks loose.

On the one hand, Bacurau may just be some small fictional village in the Brazilian northwest, yet as Plinio says to the crowd gathered at Carmelita’s funeral, her family encompasses individuals of all kinds, a veritable nation unto itself that extends outwards from Pernambuco to São Paulo and from there into the world beyond, just like the flight path that passes overhead. And if the values espoused by Mendonça and Dornelles’ creation would likely have a certain Jair Bolsonaro baying for blood, it’s telling that the villagers stop short of spilling any more of it themselves once the mercenaries have been attended to and those holding their purse strings revealed. After all, as one of the interlopers is informed, those born in Bacurau are called just one simple thing: people.