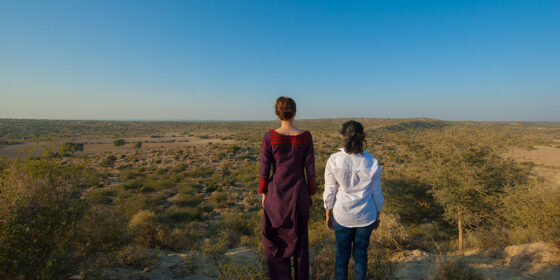 While certainly informative and laudably humanist in intent, Azmaish poses a certain problem for this reviewer, simply from the standpoint of context. This new documentary/road movie from Sabiha Sumar (Dinner with the President) is a kind of primer on the conflicts between India and Pakistan, offering a crash course that starts with the 1947 partition and moves forward with one basic argument: political leaders have been exploiting religious extremism for decades, while the average Indian and Pakistani citizen simply wants peace, mutual respect, and a way out of poverty.

The problem is that Azmaish, which is a TV co-production from ARTE, ZDF, and Sundance, is more of an educational tool than a work of documentary cinema per se. While Sumar and her friend, Indian actress Kalki Koechlin (Margarita with a Straw), engage in various edifying interviews and even manage to get thrown out of a Pakistani village at one point for trying to get the women to speak, this is strictly classroom material—and while it is absolutely valuable in that respect, Azmaish has no place in a world-class film festival. The idea that this is one of the best documentaries of 2017, or even one of the most “important” (however you choose to define that word), is absurd, and although Azmaish’s message is simple enough to possibly win it an Audience Award, its inclusion here is less a lapse of taste (a system has to be in place in order to fail) than a basic category error.