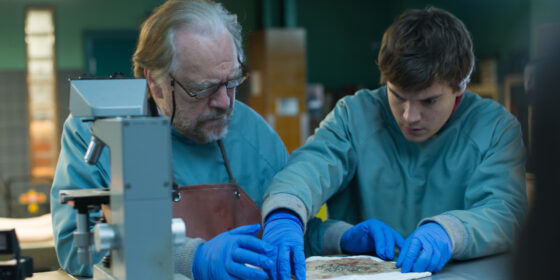 André Øvredal’s The Autopsy of Jane Doe, the follow-up to his witty Trollhunter (2011), is bolstered by the clever conceit that a locked-room mystery can be housed in a corpse’s crevasses. Naturally then, our detectives are morticians, Tommy Tilden (Brian Cox) and his son Austen (Emile Hirsch), who perform a late-night autopsy on the eponymous nobody—an unidentified victim found at a bloody massacre scene—examining her broken bones and diseased organs as if they were clues. Integrating elements of body horror, Agatha Christie and, least interestingly, contemporary horror films, Autopsy has both a cheeky simplicity (the production design of the morgue is at once devilishly eerie and cleanly pragmatic) and Carpenter-inspired formalism: Øvredal lingers on things like hallways and blood dripping down a funnel while familiarizing us with the spaces in the underground morgue. Less a subversion of genre conventions than a relatively effective repackaging of them, The Autopsy of Jane Doe is made up of established pieces that it repositions in a manner ranging from the obvious to the dexterous. Once everything has been revealed toward the latter half of the film, Øvredal hands himself over to a familiar and uninspired cat-and-mouse runaround, but even when his film relies on clichés he presents them with a calculated confidence not often seen in studio horror flicks.