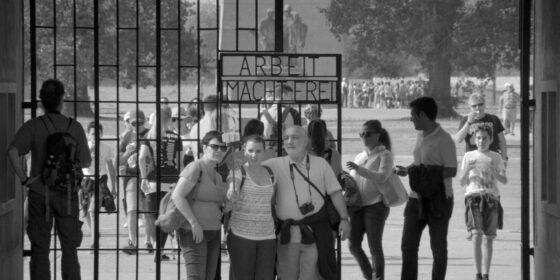 Throughout his career, as both a documentarian and the director of two feature films, Sergei Loznitsa has explored various facets of one fundamental subject: the way the human race records its own history. At times, this has led him toward excavation and re-examination of the footage of others, in films such as Blockade (2005), Revue (2008), and last year’s The Event. At other times, Loznitsa has shot his own material, offering a self-reflexive view of contemporary life as it interfaces with the past. This approach can be rigorously formal (Landscape, 2003), distanced and sociological (Factory, 2004), or observed while caught up in the tangle of current events, as revolutionaries are busily writing and rewriting their own history (Maidan, 2014).

With Austerlitz, Loznitsa may have produced his finest film yet. Exhibiting a simplicity and intellectual acuity that is far too rare in the field of documentary, Loznitsa has created a film whose cumulative impact will stay with you long after you watch it, tinting and shading the way that you experience a multitude of previously ordinary cultural practices. So basic in the telling—a record of several days’ worth of visitors to the Holocaust memorial at the site of the Sachsenhausen concentration camp in Oranienberg, Germany—Austerlitz is a film that in many ways exemplifies the critical theory of Theodor Adorno and Walter Benjamin. What is the net effect for humanity when, faced with the drive to remember the unfathomable, we employ the grossly inadequate tools at our disposal?

Austerlitz takes its name from W. G. Sebald’s final novel, one of whose themes concerned its eponymous protagonist poring over old films and documents, trying to find some record of his parents who had died in the camps. Predictably, the more he looked, the further away into history they receded. Here, Loznitsa shows us dozens of tourist groups with audio-tour players around their necks, ambling around somewhat aimlessly. We hear docents giving background information in German, English, and Spanish, and the overlap makes much of the explanation into a hopeless jumble.

But more than this, Loznitsa shows us individuals and collectives (students, church groups, etc.) asked to confront the “concentration camp,” a distant artifact that resembles an austere Epcot attraction. What are they to do? They pose under the Arbeit Macht Frei gate. They gaze out from the gas chambers. They giggle nervously. On occasion, there is a break in the traffic and someone can steal a private moment of contemplation. But Austerlitz is about the disconnection between the greatest horror of the 20th century and our inability to adequately convey it to the 21st. Loznitsa captures this tragedy in the form of a young dude bopping through the gates of Sachsenhausen, his t-shirt emblazoned with last year’s meme: “COOL STORY BRO.”