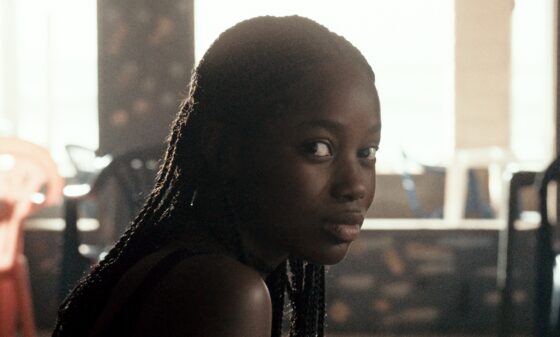 In 2012, when French-Senegalese filmmaker Mati Diop pitched her anticipated debut feature Atlantics as part of Locarno’s Open Doors initiative, the film went by the title Fire Next Time. While much in the film has changed in the time between its initial conception and its recent Grand Prix as part of the Cannes Competition, it’s worth considering the words that precede the abandoned title in its original Biblical citation (by way of an American Civil War-era spiritual): No more water.

While set on land, water reappears constantly throughout Atlantics, its presence at times blissful and dreamlike, at other times nightmarish. Diop punctuates her film’s narrative with extended shots of the sun or moon reflecting on the slow, rippling waves of the Atlantic Ocean, and while her editing suggests that the glimpses we see are from the coast of Senegal, the water often fills the frame, bereft of any geographic point of reference. In addition to a reminder of the countless African lives lost in that body of water over five centuries, that shimmering surface becomes the central visualization of the film’s mirroring and inversion motifs, which appear first in Diop’s naming conventions, from the plural Atlantics in the film’s English title, to the lead character, changed from Adel in an earlier pitch to the palindromic Ada (Mama Sané).

Among the key inversions is the film’s premise itself, which offers the complementary, untold story behind Diop’s debut short Atlantiques (2009), a hybrid documentary in which a group of young men discuss their experiences of sailing from Senegal to Europe in search of economic opportunity. A decade later, Atlantics, set and shot in Dakar with non-professionals, tells the story of the women left behind. While Diop produced her earlier film using a standard-definition digital camera, with the resultant image quality being aesthetically much harsher than the smooth look of Atlantics, the two share an overall atmosphere that is at once inviting and eerie. Music plays a major part in this, with Atlantiques’ ghostly synth soundtrack expanded and elevated in the feature by an original score courtesy of experimental composer Fatima Al Qadiri.

Before and beyond considerations of its plot or obvious artistry, the Cannes presentation of Atlantics as a film—and Diop as a filmmaker—was an extremely loaded occasion. Shamefully the first film by a black woman competing for the Palme d’Or (and, by extension, the first to win an award), Atlantics was also the only film to represent sub-Saharan Africa in the festival. While the film signals the entrance on the world stage of Diop as a narrative filmmaker—and one hopes that the film’s Netflix acquisition means that remittance will be especially broad—the film emerges after an impressive, decade-long run of high-quality short and medium-length work. As if looking simultaneously backwards and forwards, Atlantics exists as a culmination of sorts while also signalling a shift in Diop’s filmmaking, most notably the abandonment of a strong commitment to nonfiction experimentation for a moody narrative drama, one which variously incorporates the gothic, the policier, and the supernatural.

Yet Diop also explicitly situates Atlantics within the history of Senegalese cinema. In one of the film’s early moments, we watch a herd of cattle traverse the frame from right to left, an image famously included among the opening shots of Touki Bouki (1973) by Diop’s uncle Djibril Diop Mambéty. (Diop had previously cited the sequence as part of the medium-length essay film Mille soleils [2013], her shape-shifting portrait of Touki Bouki star Magaye Niang.) By introducing this common visual motif, Diop not only situates her film within that cinematic legacy, but introduces narrative threads that amplify the ways in which exploitation and a desire to escape to Europe still hold true today, almost 50 years later.

Atlantics opens along the Dakar shoreline, with hazy footage of young men working on the scaffold of a major development project, likely the latest addition to the cluster of shiny towers we see nearby. We’re introduced first to Souleiman (Ibrahim Traoré), a handsome and quiet labourer. One of several young men who have gone several months without their hard-earned wages, he’s decided to depart with companions by pirogue to Spain. These first minutes of Souleiman with his co-workers are among the film’s few sequences that take place exclusively between men, with the film shortly thereafter pivoting to the lead figure of the 17-year-old Ada, her friends, and the other women soon to be left behind by their partners. (Here’s it worth noting as an aside that while Céline Sciamma was justly lauded for ensuring a women-driven production in addition to her women-centred story, Diop’s film boasts talented women in the roles of producer, cinematographer, editor, composer, and more.)

Despite Ada’s romance with Souleiman, she is already committed to an arranged marriage with the uncharismatic businessman Omar (Amadou Mbow), and the wedding takes place in the midst of Ada’s despondency over her abandonment by Souleiman. During the evening of the celebration, Ada’s wedding bed mysteriously bursts into flames, with her friend Mariama (Mariama Gassama) claiming to have seen the departed and possibly perished lover on the premises. As fire appears for the first time in a film that has hitherto been concerned with water, it signals a quiet shift from a form of narrative realism to something less rigid and familiar.

For all that Atlantics is situated as a distinctly Senegalese drama, Diop doesn’t refrain from introducing broader reference points, and several of the plot devices and motifs emerge out of an adherence to traditional elements of the gothic, chief among them the aforementioned doubling device that bears a resemblance to classic tales of embodiment by the likes of Mary Shelley and Robert Louis Stevenson. From the moment of the fire, Diop also begins to incorporate elements of the mythic, primarily through the Islamic figure of the djinn, a spirit that is able to take the form of humans or animals and is itself born, according to the Koran, out of a smokeless fire. It’s an inspired and compelling shift: like the film’s positioning between eras, the most remarkable moments serve to wed disparate influences into an atmospheric and tonally unique project, one that embraces the extensive legacy of Senegalese cinema and culture while producing something that feels unlike any recent work from the region.

“This fever is a nightly invader, that strikes the patient during deep sleep,” reads one of the cryptic intertitles in the short Atlantiques, and this phrase serves as an efficient, evocative descriptor for the nocturnal apparitions that populate the feature’s second half, with the spirits of departed young men inhabiting the corporeal forms of all their partners except for Ada, turning them into zombie-like avatars. The mysterious fire also serves to introduce the character of Dior (Nicole Sougou), a detective suffering from an unspecified illness who begins to trail Ada in hopes of finding Souleiman, the lead suspect in the arson despite the latter’s departure. Frequently seen in a state of near-delirium as he pursues his work and moves through the city, Dior continues in his efforts even after learning of the young men’s tragic fate, and gradually himself falls victim to a visiting djinn. (If Diop’s unique embrace of the gothic and Islamic mysticism serves as Atlantics’ most resonant gesture, Dior and the attendant dramaturgical play with film noir and the police drama feels less sustained and less satisfying.)

For all of the (literal) shape-shifting and experimentation Diop utilizes throughout Atlantics, she introduces a final form of symmetry in her film’s structure by beginning and ending with moments of tender romance between Ada and Souleiman. In creating a revisionist version of the heart-wrenching separation of the two lovers at the end of Touki Bouki, Diop fully embraces her turn to fiction, wielding the form to collapse space as vast as an ocean. No more water.