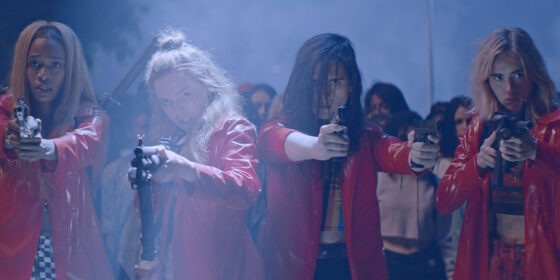 The red, white and blue split-screen that showcases the horny, house-partying girls of Assassination Nation is the first—and maybe best—bit of neo-Godardian gamesmanship in Sam (son of Barry) Levinson’s state-of-the-union horror comedy. Suffice it to say that there are more plausible candidates to make satire great again than the guy who directed The Wizard of Lies, to say nothing of the fact that this ostensibly anti-misogynist plunge into distaff objectification and abjection, with incessant sexual violence (and jokes about rape jokes!) is written and directed by a white dude—a well-meaning one, to be sure, one who has read his Arthur Miller and duly reduced its essence to emoji-style bullet points.

So, sad face: after half the population of the city of Salem has its data hacked by an Anonymous-style e-terrorist, the men turn on the hot, horny high-school girls who’ve so shamelessly inflamed their desires via their Instagrammed existences. It’s a clever set-up, permitting the ticking of various politically correct boxes while exalting in all kinds of wretched excess, hence the entirely smug “trigger warnings” that frame the proceedings (an conceit worthy of Gaspar Noé, and all that that implies). But the more that Assassination Nation tries to be about everything—hysteria, hypocrisy, media hypnosis and, of course, Donald Trump—it sacrifices precious specificities of character and context. Plus, casting Joel McHale as the Purge-masked face of toxic masculinity isn’t as effective as, say, unleashing James Franco in Spring Breakers (yet another film that Levinson is chasing without quite catching up to). Everything you need to know about this film is contained in its most self-consciously bravura sequence, an extended, single-take home invasion that’s at once accomplished, self-impressed, sadistic, and redundant.