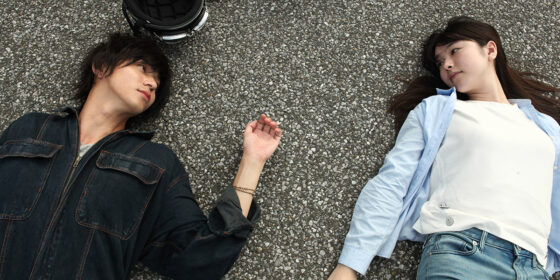 By far the most surprising and satisfying selection of this year’s Cannes Competition, Hamaguchi Ryusuke’s Asako I & II sets up and throws out stylistic paradigms faster than you can grab hold of them. As if to maximize the frustration of viewers who prefer to distinguish the fantastic from the “real,” Hamaguchi’s amorphous aesthetic—blending naturalistic and affected performances, unobtrusive and flashy editing—renders inseparable inner and outer and public and private forms of experience. Where Asako’s five-hour-and-17-minute predecessor Happy Hour (2015) made the external world firm, static, and hard-edged, this comparatively brief and far more accessible romance based on a novel by Shibasaki Tomoka adopts a more mercurial approach. Instead of giving the impression of individuals going about their lives unchanged by what surrounds them, Hamaguchi conveys a crucial symbiosis, one efficiently summarized by the photo exhibit by Gocho Shigeo that features prominently in the film: Self and Others.

While perusing Gocho’s black-and-white photographs of Tokyo circa the ’60s—when the city and its industries underwent a process of Westernization that is yet to be undone—Asako (Karata Erika) notices Baku (Higashide Masahiro) from the corner of her eye, and is immediately taken by the misanthropic charm of the hunched, threadbare, and poorly coiffed twentysomething. After following this stranger back to street level and tracking him to a riverside sidewalk, she approaches and kisses him—in slow motion, and to the sounds of exploding firecrackers—before they even have the chance to exchange words. Smash cut to Asako seated with a table of skeptical friends: “And that’s the story of how we met.” With this decisive break in continuity, Hamaguchi transitions from the dollies and pans of Asako’s memory to a neutral long shot. Separating the mythical origins of Asako and Baku’s relationship from its current, less remarkable state, this cut recalibrates our expectations and establishes what seems to be an artifice-free present tense. Suddenly, fast forward to two years later: Baku has disappeared without a trace, and Asako has moved from Osaka to Tokyo, where she now lives with a roommate, an actress named Maya (Yamashita Rio).

Just when the film appears to have left fantasy behind, Hamaguchi stages another miracle: while delivering coffee to an office building across from her work, Asako walks into a boardroom where she encounters Ryohei, a salesman of novelty sake who, apart from his superior posture and slicker hairdo, happens to be a perfect double of Baku (and is also played by Higashide). As she, Maya, and Ryohei sit together at a coffee shop just days later, Asako averts her gaze from this uncanny twin to scrutinize his reflection in the shop’s window, her ardour reawakening even as the object of her affection becoming indistinct—is it Baku, Ryohei, or an internalized image of the two that she desires?  Confused by her feelings, Asako stages a disappearance of her own, only to have the powers of coincidence (or Providence) pull her and Ryohei back together in yet another unlikely event: an earthquake that cancels a performance of Ibsen’s The Wild Duck in which Maya stars. Scouring the streets, Ryohei happens upon Asako and embraces her as the rest of the city frantically flees from aftershocks. Once again, years go by in the span of a single cut, and Asako and Ryohei reappear in their own apartment with their own shared routines. After flashbacks and pathetic fallacies, we finally appear to have entered a period of relative calm.

Asako I & II leads to the inevitable moment when Baku, now a minor celebrity, returns to our previously passive protagonist and interrupts her years-long relationship with Ryohei, thrusting Asako into a narrative scenario that Stanley Cavell famously dubbed the “comedy of remarriage.” In contrast to the classical comedy, which sees a pair of potential lovers overcoming obstacles to find each other, this recurrent story is about suitors who struggle to maintain subjective knowledge of their love. According to Cavell, the protagonists’ uncertainty in the remarriage comedy reflects or allegorizes a conundrum central to philosophy: namely that of human beings as divided and double, existing as both subjects who perceive and objects who are perceived. What is at stake here, and pertinent throughout Asako I & II, is the identity of the bifurcated protagonist as a single, independently existing self, capable of knowing the world internal and external to her being. As there is no way to know that things-in-themselves, the actual person or object that exists in the sensible world, are as they appear to be (thinking subjects like ourselves), we can only understand the conditions under which we perceive these things, and not the actual things themselves.

The doubling of its designated object of desire aside, Hamaguchi’s film is thus less close to Vertigo (1958) than it is to Rohmer’s Un conte d’hiver (1992), one of Cavell’s signature remarriage comedies and one which makes use of a similar structuring absence: the disappearance of Charles (Frédéric van den Driessche), an event that permanently plagues the mind of his lover Félicie (Charlotte Véry) long after their unintended separation. For the conservative Catholic Rohmer (whom Hamaguchi cited as an important influence on Asako in a Film Comment interview with Jordan Cronk), art and liturgy provide some of the solutions to the epistemological problem posed by this scenario: describing the moment when Félicie becomes transfixed by a Nativity scene in a church, Cavell writes that what she experiences is “not thinking but rather…seeing her thoughts, which came to her as with a total clarity, or with a clarity of totality.” It is here, in a state of spiritual transport, that she rectifies the act of hesitation that led to years of estrangement from Charles, deciding for certain, with full knowledge of her own self, that she will wait for him to return no matter how long it takes.

Although Asako and Félicie are stuck choosing between various men as though romance were the only available course of action for them, the primary conflict in both Un conte d’hiver and Asako I & II takes place internally. Even after she and Ryohei move in together and consummate their courtship through their joint ownership of the cutest cat at Cannes (apologies to the feline from Burning), Asako remains afflicted by her awareness of a double, unsure of whether she loves Ryohei for his resemblance to Baku, or whether she was attracted to Baku so that she would later discover and fall for Ryohei.

In Hamaguchi’s universe, both of these realities—the inner lives of characters and the external world they exist within—are in a constant state of dialectical transformation, becoming so closely intertwined as to be, at times, indiscernible. As in Rohmer’s films, much of Happy Hour is spent in transit, on the trains, subways, and sidewalks that get the four female protagonists from point A to point B, capturing the changes they undergo as they interact with their environs and the people they cross paths with, each location and passerby leaving a miniscule mark. Likewise, in Asako I & II  the transcendent affirmation that Rohmer’s Félicie discovered in a theatre and church is found in things far more ordinary, in natural cycles (wind, sun, earthquakes), unremarkable spaces (art galleries, coffee shops, homes), and everyday interactions—elements that blur the mundane and otherworldly, the divided self and the doubled world. At the end of Asako, the decisive decision to return to the domestic life offered by Ryohei expresses not a conservative subservience to patriarchy (which Hamaguchi had already critiqued in Happy Hour), but our heroine’s internal discovery of herself by herself.