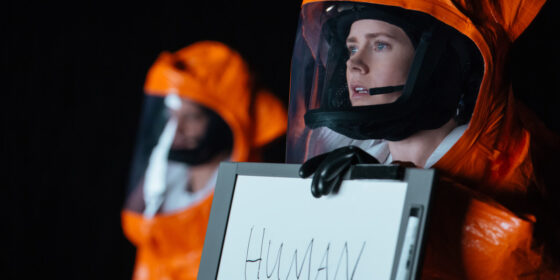 Sci-fi is a hospitable genre, as it allows filmmakers to both experiment within and reinforce its outer conventions. Denis Villeneuve’s Arrival creatively positions itself within that relationship. Based on Ted Chiang’s short tale “Story of Your Life,” the film employs a voiceover commentary that holds together its major motifs: science and emotion, humanity and individual destiny.

Amy Adams plays Louise, a linguist and professor who closely resembles Jodie Foster’s character in the 1997 Contact (a sure inspiration). Through a first-person narration, accompanied by “Malickian” framing and close-ups, we learn that she’s lost her teenage daughter. Without much time to piece together the larger context—is she still grieving because it’s a recent event? Is there a father?—12 egg-shaped spaceships land in different locations all over the world. Louise is quickly brought on by Colonel Weber (Forest Whitaker), along with mathematician Ian (Jeremy Renner), to arrange a meeting with the aliens as fear of an attack ramps up. Villeneuve depicts first contact via a classic, Pocahontasesque hand-onto-tentacle scene which initially disappoints in its lack of aesthetic innovation. This familiarity is also felt in the visual representation of the aliens and their written language (a circle-based logogram). To sum up the scientists’ discoveries, an additional voiceover commentary comes in, oddly mocking the style of nature documentaries while serving the purpose of both releasing the situation’s tension and speeding up the storytelling.

The anxiety over the aliens’ intentions and the excitement of the unknown are unbalanced here in favour of the first, more generic impulse. Arrival stages a dilemma where the desire for knowledge clashes with instincts of fear and hostility, but the overarching theme is time and our linear experience of it. It is precisely here that Arrival proves itself an interesting variation. Instead of refreshing the visual tradition of the genre, Villeneuve cleverly uses the oldest means at his disposal—montage and storytelling—to produce a film that, in however modest a way, represents a valid chapter in science fiction’s cinematic evolution.