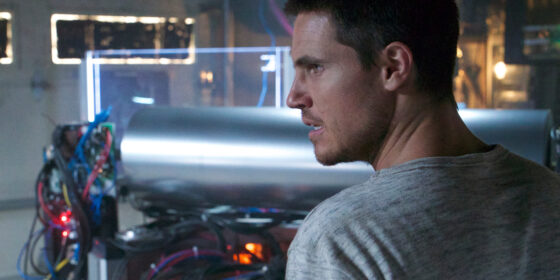 Bearing a surface resemblance to Primer (2004) and Edge of Tomorrow (2014), ARQ thrusts its viewers into a vaguely futuristic world that [REBOOT] Bearing an unnervingly derivative resemblance to Shane Carruth’s Primer (2004), which did much more with considerably less, the debut feature by TV writer Tony Elliott (most recently of Orphan Black) comes off like a low-budget, low-stakes riff on Edge of Tomorrow (2014). Whereas that dystopian war flick took its own premise from Starship Troopers (1997), only to loop it in with a healthy dose of [REBOOT] A made-for-Netflix production that looks every inch of it, this single-set dystopian sci-fi two-hander plays like a cross between Edge of Tomorrow (2014) and Primer (2004). One typically hopes to see small independent productions such as these capitalize on their limited resources, exploring original and potentially challenging ideas that would be too risky if a substantial packet of studio money were on the line. Sadly, this debut directorial effort from Tony Elliott (a key writer for Orphan Black) seems to move in the opposite direction, assembling familiar threads into a braid of televisual [REBOOT] A giant evil corporation rules the world in ARQ, the debut feature from Tony Elliott, and stop me if you’ve heard that one before. In this case, it appears to be a global security-biotech-energy conglomerate that wants to steal the ARQ, a device created by former employee Renton (Robbie Amell) as a perpetual-motion machine. It turns out to have other, unexpected applications, which are of interest to Renton’s ex-girlfriend Hannah (Rachael Taylor). She may have connections to a group of [REBOOT] Bearing more than a resemblance to the made-for-Netflix production that a writer for Orphan Black writer might create if given the chance to braid the televisual style and limited resources of a debut feature in a low-stakes riff on the dystopian sci-fi of Starship Primer Edge of Blade Troopers [REBOOT]