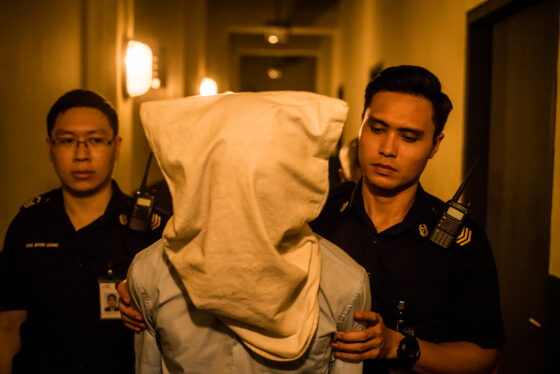 It’s rare to come across a film as utterly, ruthlessly plot-driven as Apprentice, particularly in the at least theoretically rarified environs of Cannes’ Un Certain Regard section. Boo Junfeng’s second feature tells the wearingly predictable story of Aiman, a buff young ex-army officer who has taken a job at a Singapore prison because he apparently wants to help the inmates become better people. Yet such sentiments are immediately forgotten once he claps eyes on the prison’s chief executioner Rahim, an unexpectedly charming, fatherly type with a nice line in dark secrets, which conveniently dovetail with the equally mysterious roots of Aiman’s daddy issues.

There’s not a single line of dialogue, casual situation, or random prop in Apprentice that isn’t ultimately aimed at turning the wheels of the contrived plot. While this unadulterated focus on narrative might have paid dividends if said wheels were turning faster, the film’s soporific pace only generates a sense of latent impatience for each heavily signposted payoff to arrive rather then delivering streamlined thrills. Aiman’s character is equally put together so as to be devoid of any feature that doesn’t tie into the story, a pure construct with such a limited range of actions and feelings that they can’t possibly convey the true complexity of the real-life dilemma at the film’s heart, namely the insidious fascination exuded by the death penalty. For a film theoretically critical of the harshness of Singaporean justice, it’s anyway peculiar how much attention is lavished on the execution procedure, with the tastefully darkened corridors, close-ups of ropes and pulleys, and dutiful explanations of the moral components of the process all veering closer to fetishism than condemnation.

Given its complete lack of non-essential components, there’s nothing to anchor Apprentice in the mind once the plot has run its course; it’s a film whose moral indignation is channelled so mono-dimensionally that it’s bound to be quickly forgotten. What’s harder to forget though is the thought of all the other, more memorable films it still managed to push out of the Cannes selection. Now there’s really something to be indignant about.