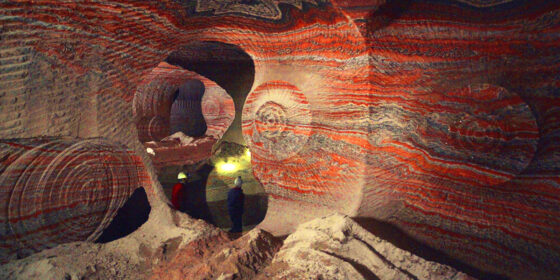 Coined by scientist Paul Crutzen in the early 2000s but popularized by the Iraq War veteran cum essayist Roy Scranton’s 2015 book Learning to Live and Die in the Anthropocene, the phrase “anthropocene” (wildly popular among totebag-wielding anarchists, autonomists and accelerationists in New York City) refers to the era of Earth’s history where human decisions begin to produce irreversible geologic consequences. By late 2018, anyone reading Cinema Scope’s TIFF capsules probably has a working notion of what those consequences look like: rampant pollution, cute animals pushed to extinction, price surges for once-abundant natural resources and much more. But aside from the imminent collapse of human society, what’s depressing about this film from the makers of Manufactured Landscapes is that it spectacularizes far more than it actually reveals.

It’s clear how much work went into Anthropocene: Baichwal, de Pencier & Burtnsky’s documentary is littered with drone-shot evidence of the aforementioned catastrophes, featuring detours into Norilsk (Russia’s most polluted city, north of the Arctic Circle), the Carrara marble quarry in Italy (complete with a gargantuan backhoe struggling to move massive hunks of marble, scored to an opera solo), the withering coral reefs of Australia and Indonesia, the deforestation of Vancouver Island, mountains of elephant tusks set aflame by Kenyan anti-poaching activists… the list goes on. The film (which is narrated by Alicia Vikander, giving a bizarre National Geographic-style sheen to an essentially downward-facing survey of humankind’s endless fuck-ups) ends on a note of complicity-for-all before announcing that the anthropocene is yet to be approved by the International Union of Geological Sciences as a classification for this epoch. A documentary focusing explicitly on that movement, to say nothing of the root causes for our turbo-capitalist affliction, probably would be more boring: it wouldn’t require the widescreen helicopter vistas of lithium mines, smouldering factories and canyons of garbage that have already been fodder for common consumption for decades. But there’s no denying the images are stunning.