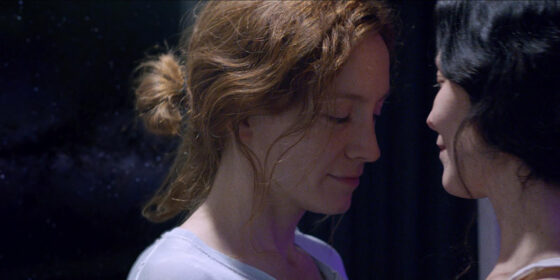 In this Swedish sci-fi film from first-time feature directors Pella Kågerman and Hugo Lilja, getting our ass to Mars doesn’t turn out to be a great idea. The journey on the spaceship Aniara is projected to last three weeks, an unbearable amount of time were there not plenty of modern distractions on board: restaurants, casinos, shopping malls and swimming pools abound (in case you doubted that capitalism would outlive the Earth itself). There is also MIMA, a large empty room with a translucent, lava-like, computerized ceiling allowing people to access their personal memories of Earth—but visitors are few, not because they too are not convinced by such a facile and ridiculous-looking concept-slash-metaphor (or maybe they’ve just seen Solaris), but because they are busy spending their cash on luxuries. A young, petite woman named Mr (Emelie Jonsson) is in charge of MIMA, and when an accident occurs, leading the ship to drift into space potentially forever, she has to deal with an influx of scared passengers looking to relive their happier moments. (My own reaction to such terrible news would be a lot less restrained, and would probably involve some sort of revolt against management, however futile.)

The collective reactions of everyone on board, and the delay with which orgies disguised as cults start to appear, feel like miscalculations, and not only because they make the film a bore to sit through. It soon becomes clear that what we here is a case of purely allegorical sci-fi, where truthful human behaviour is neglected for the supposedly powerful image of a species quietly floating in space because of its own mistakes. Everyone around Mr has the emotional bandwidth of a robot, which makes a clear point about the dehumanizing nature of modern society—and also maybe about derivative modern sci-fi.