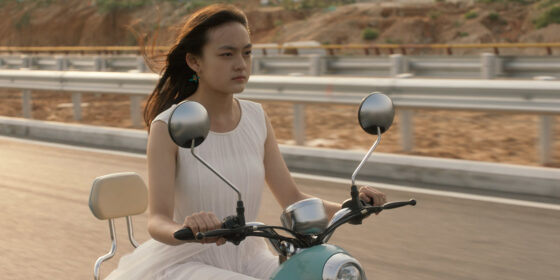 It’s no spoiler to say the whole damn system is found guilty as hell in Vivian Qu’s Angels Wear White. While a sleepy coastal town refurbishes itself as getaway destination, a teenage migrant worker named Xioami (Wen Qi) fills in for her friend working the reception desk at a hotel. There, she’s privy to evidence of an assault on two younger girls, carried out by a middle-aged guest — who turns out to be a low-level police commissioner who has intimidated the two victims into silence before a hospital visit can even confirm the rapes. Already carrying plenty on her shoulders, the tight-lipped Xioami is now the sole witness, and the subsequent investigation sees a hardened lawyer (Shi Ke) trying to buy information from her one clandestine meeting at a time.

At first glance, Qu’s overall approach may seems dispassionate or withholding. Although no formal rules are being rewritten here, Angels Wear White makes for an intriguing case study: the procedural as ambient melodrama, a film that makes its founding injustice plain as day and takes things from there. What really pierces are the performances of Qi and Zhou Meijun (as one of the victims), both of which confirm Qu as an astute director of children. Their austere looks grip the frame in transitory downtimes when little else seems to be happening; tension is ramped up according to what’s left out of the narrative. Qu’s ultimate verdict is cast on a society where the only thing worse than being poor is being female. Xioami returns time and again to a massive beachside statue of Marilyn Monroe (circa The Seven Year Itch); the discerning cinephile will recall the gargantuan plaster lady-legs of Piero Schivazappa’s Femina Ridens, while the self-hating one will recall a particularly base sight gag introducing Leslie Nielsen’s love interest in Spy Hard. Nevertheless: this Marilyn is awe-inspiring at first, especially seen from Xioami’s pint-sized point of view, but she eventually becomes an impossible-to-misinterpret symbolic motif at the core of a movie whose slow-boiled indictment doesn’t need one.