Angels Are Made of Light (James Longley, US/Afghanistan) — TIFF Docs 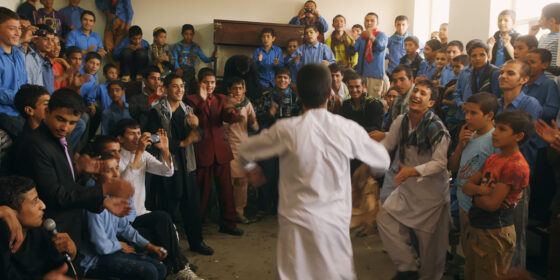 James Longley’s unfortunately titled Afghanistan documentary Angels Are Made of Light spans three years in the lives of a handful of schoolchildren (all boys) in Kabul. It’s a significant achievement in the gathering of footage, shot by the filmmaker himself, who manages to give ordinary day-to-day moments a sheen that’s elegant to the point of being suspect. In the periphery, Longley gives voice to ordinary citizens who are tired of US-bought electioneering; some of them lament the Mujahedeen rolling things backwards after the secular modernizations of the mid-20th century, while others yearn for the legitimization of a Taliban power structure. (One extraordinarily powerful sequence sees a cadre of shirtless young Shia men self-flagellating in a city square.) The film climaxes in the 2014 elections, wherein John Kerry’s State Department insisted upon a power-sharing government led by Ashraf Ghani, which was widely seen as corrupted by interference and guaranteed to dissatisfy all parties.

Especially given the United States’ forever-war in Afghanistan (which turns 17 during this year’s TIFF), it’s hard to root against a movie with such an obvious interest in giving cinematic texture to the experiences of ordinary people on the ground. Yet Angels somehow ends up saying remarkably little: the schoolchildren are quoted in platitudinous, contemplative voiceovers (their corresponding audio taken from one-on-one interviews with Longley), which, combined with a sugary score by John Erik Kaada, gives the cumulative impression that things are on the up-and-up. Some have read Angels as a corrective, or a meta-comment on the ease with which Western viewers can insert themselves into the lives of the downtrodden in faraway places with little foreknowledge or context. It’s possible, I suppose—but it’s likelier that the filmmaker won these people’s trust anticipating that a fascinating story would emerge, and doubled down on pictorializing their resilience when it didn’t. Whatever hope avails itself is more symptomatic of the kids’ burgeoning awareness in their early teenage years that life, hopefully, is long.