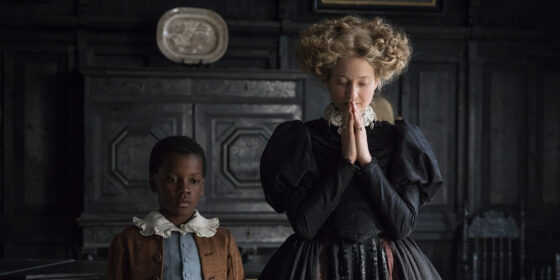 It’s funny in an Austrian sort of way that Markus Schleinzer should take seven years to follow his 2011 Cannes debut Michael with a movie called Angelo. That kind of contextual anti-joke would be at home in his latest, a self-reflexive 18th-century period piece, pitched at the edge of irony, about the eventful life of Angelo Solliman. Born Mmadi Make, the Viennese courtier was abducted from Nigeria as a child, sold into slavery in Marseilles, and raised as a court slave in Sicily by a marchioness (Alba Rohrwacher). In her magnanimous whiteness, the marchioness decides that Mmadi/Angelo will replace her dead son (also Angelo), be groomed into a prince, and prove to a world that up to now is reliant upon colonial diarists’ tales from around the world that Africans needn’t be seen as “godless creatures given over to the devil from birth.” And so we have both nu-Angelo, rechristened after his predecessor as well as “God’s first messenger,” and Angelo, a sneaky film that like its predecessor Michael seems interested in the way our character interacts with malevolent outside forces to make people the sum total of what they are.

A bone-dry formalist like his frequent collaborator Michael Haneke, Schleinzer gets a lot of mileage out of the hollow grandeur of the Viennese court. In strikingly framed and dramatically lit 4:3 frontal tableaux, he observes the goofy rituals into which Angelo is indoctrinated with a detachment that undermine the marchioness’ contention that his participation in noble European institutions like literacy, balls, and theatrical performance (in racist melodramas about evil Moorish kings) are great victories “on the path to becoming human.” Insofar as the five actors that play Angelo display their humanness, it’s in their bemusement and traumatized detachment from the tasks they are forced to perform. The closest any of them gets to idiosyncrasy is when the twentysomething Angelo interrupts a tender moment with a lover by passing gas.

That all of the Angelos are ciphers save for that moment of indulgence is both a feature and a bug. Schleinzer here essentially inverts Moonlight, showing a young black boy meeting all the wrong people and becoming European because of it, which is to say hollowed out. He plays Angelo’s death, his body taxidermied, displayed in phony African garb in Vienna’s Naturhistorische Museum, and stuffed into a box, more as black comedy than horror, albeit punctuated by his daughter’s blood-curdling scream as she’s turned away at the door. It’s hard to argue with this reading that Angelo’s disgraceful end is the natural conclusion of the white liberal colonial project with respect to “curios” like a black intellectual who ran in Mozart’s circles, but one wonders what a black filmmaker would have made of the same story, unencumbered by the need to make this ultimately obvious point about the way whiteness burns through everyone it touches.