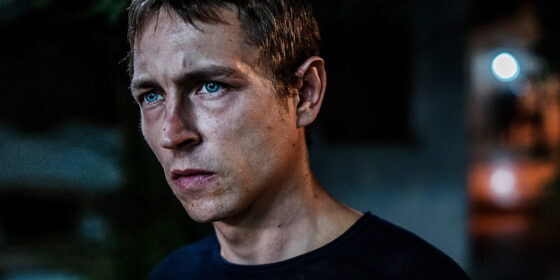 A film that’s initially mysterious enough in its jagged rhythms, shifting perspectives, and bold colours to stir feelings of possibly unearthing a hidden cinematic sibling to Claire Denis or Bertrand Bonello, it’s highly unfortunate that by the end of Koen Mortier’s Angel one only gets the sense of a work that doesn’t stick the landing. Beginning with heavy cross-cutting between sex worker Fae (Fatou N’Diaye) and famed cyclist Thierry (Vincent Rottiers), two people on opposite ends of the class spectrum, Angel sets up what initially seems like an easy binary: the former is making her way through the job, haunting her town’s seemingly only popular bar, while the latter heads to Dakar to “chill” (though one would be hard-pressed to imagine joy ever striking the permanently frowning face of Rottiers). Yet the editing, at least for the first 30 or so minutes, remains surprising, weaving through time, points of view, and continents with a striking, impressionistic force.

The first clue to the film’s ultimate game plan comes when Thierry remarks to his brother escorting him on the trip that he can’t make love to a woman unless he loves her. Once his and Fae’s paths cross after a rotten hamburger in a tourist-trap bar, he naturally falls for her. As the pieces of the narrative puzzle come into place, one becomes privy to the simple idea that Thierry’s possessiveness of Fae is simply a need to recover from the failures of his career; the immediately shocking suicide fantasies that Mortier sprinkles throughout the film eventually reveal themselves as simply stand-ins for Thierry’s impotence. Fae’s titular Ange may be who we begin and end the film with, but Thierry’s more pedestrian issues are unfortunately where the film’s heart ultimately lies.