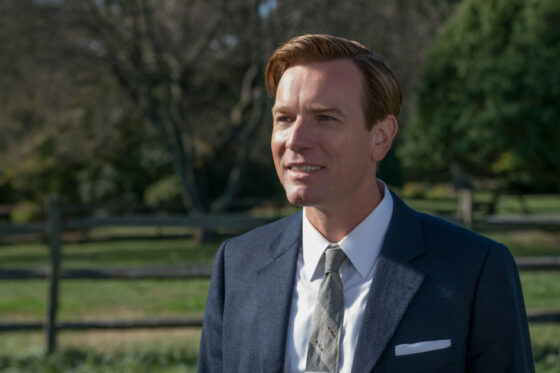 Only Philip Roth could conceive an epic in which a Jewish patriarch is literally blameless and figuratively guilty for the sins of the Greatest Generation—self-flattery and self-flagellation conveniently interlaced. That said Jew is played, in this new cinematization of Roth’s American Pastoral, by the Scots-born Ewan McGregor (pulling double duty behind the camera) is superficially the silliest thing about the film, which remains faithful to its source text’s blunt late-20th-century allegory (and its hysterical sexism) while smoothing out the most outrageous detail: the full-mouthed, reverse-Oedipal kiss that McGregor’s Swede Levov plants one sunny afternoon on his young daughter Merry, which serves in time to turn her into Newark’s version of Patty Hearst. (Not even Forrest Gump [1994], with which McGregor’s film shares one brutally obvious musical cue, had such a cut-and-dried psychosexual rationale for a troubled teenage girl’s embrace of radical activism; at least nobody dies of AIDS here.)

The reason American Pastoral works on the page (to the point that it’s routinely voted one of the greatest novels of all time, for whatever that’s worth) is the rich and suggestive ambiguity of the framing device, in which Swede’s story is reconstructed by familiar Roth manqué Nathan Zuckerman, who idolizes his old high-school hero as a neighbourhood kid made good. Here, the metafictional aspect of the book is reduced to a few short scenes (with the patrician David Strathairn as Zuckerman; I kept expecting him to wish the audience “good night and good luck”), and we’re meant to take everything absolutely straight, including Jennifer Connelly’s faded beauty-queen psychosis as Mrs. Levov, Valorie Curry’s villainous Basic Instinct (1992) act as a nasty jailbait radical, and Dakota Fanning’s bratty/shell-shocked overacting as Merry—a holy feminine trinity to befuddle even the most decent, upstanding family man. The whole production feels verged on the perch of camp, and would be very satisfying if packaged as a genre spoof; maybe call it Roth Hard?