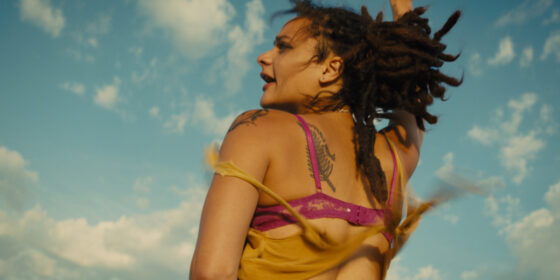 Following Andrea Arnold’s third consecutive Cannes Grand Prix, allow me to suggest another award, this one for lifetime achievement: Most Literal-minded Use of Pop Music. Determined to top the deployment of Nas’ “Life’s a Bitch” at the climax of the 2009 Fish Tank (in which life was a bitch), Arnold kicks off her 162-minute ode to America—its Honeys, its Beauties, its Psychos, its Idiots, you name it—with Rihanna’s undeniable “We Found Love” blaring over the loudspeakers at a Wal-Mart, which the now transatlantic auteur takes pains to show is, indeed, a hopeless place. Elsewhere, the caravanning, magazine subscription-selling kids who comprise American Honey’s dramatis personae bump Juicy J to get psyched (sadly, not Fiddy’s “I Get Money”); make out to Mazzy Star’s “Fade Into You” (fresh royalties for Hope Sandoval!); and describe their dreams to the accompaniment of, um, “Dream Baby Dream” (the version by Born in the USA-era Bruce, of course). That Lady Antebellum gets to bat cleanup with the title track suggests that Arnold is trying to touch a mainstream nerve, and yet American Honey doesn’t feel like a true crossover move, stuck as it is in a formal-rhetorical Never Never Land halfway between Malickian lyricism (when in doubt, cut to a bug!) and Vice travelogue. It’s possible that dreadlocked star Sasha Lane is a good actress as well as a compelling camera subject, but you’d never know it from her studiedly affectless performance, which at least evens out Shia LaBeouf’s shameless post-Gosling posturing. As for the hacked-off aspect ratio, it may be that Arnold is trying to compromise the inherent widescreen grandeur of the landscape (and the entire road-movie genre), but like almost everything else here it’s a conceit rather than an idea, and it’s the strategic vaporousness of the entire enterprise—its canny refusal to be “about” anything except an immersion its own roiling, over-conscientiously detailed millennial milieu—that rankles. If only the soundtrack supervisor had cued up “Big Empty.”