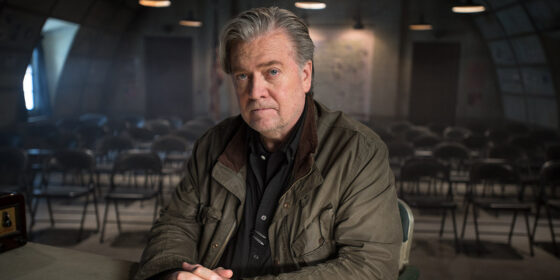 Many viewers “only” know Steve Bannon as the bad-skinned evil plotter behind Donald Trump: a racist, a fascist, an occasional movie producer, a failed media mogul—in other words, not exactly a cinephile. Errol Morris’ documentary about Bannon, American Dharma, includes excerpts of classic American films picked by Bannon to illustrate his career, which spans from the exploitation of virtual currencies in the gaming industry to recent alt-right proselytism in Europe.

The interview opens with excerpts of Twelve O’ Clock High, where Bannon identifies with Gregory Peck as the embodiment of two ideal types of leadership. He has the so-called “dharma”: duty, fate, destiny. What the second type of leadership entails, we never find out. This may be due to Morris’ editing, or, more likely, to the inconsistent nature of Bannon’s speech, which we are led to believe is a direct consequence of his contradictory thinking. Differently from The Unkown Known, where Morris left Donald Rumsfeld’s frightening rhetoric speak for his own lies, in American Dharma the director straightforwardly confronts his interviewee, openly highlighting the incoherence of his claims. There are two Bannons, states Morris: a good one who strives for the working class, and a bad one who yearns for a government-free, unregulated social system.

Here, Morris exposes himself more than usual. His words as he confronts Bannon appear to be motivated not by bewilderment, but by fear—the same fear that compelled him to support Hilary Clinton instead of Bernie Sanders. It was Bannon, a fan of The Fog of War, who pitched the documentary about himself to Morris. Morris accepted, hoping to shed light on his point of view, even though he finds it frightening. But wondering whether it’s nature or nurture, indifference seemed more dangerous than offering the man yet another stage to speak on.

One thing Bannon says makes sense: “Politics have become media.” Tweets and news stories triggered by Bannon’s involvement with Breitbart and Trump’s presidential campaign (such as Weinergate and the Clinton email controversy) are recalled in recurring visual reconstructions reflecting contemporary modes of information production and process. It’s nauseating, less for the content than for the form of the stream. Each of the chapters of the interview is introduced by a different font. One of the last ones, “Angry Voices,” uses the same type as the popular video game Angry Birds. Morris’ use of media tropes suggests that Bannon’s reasoning is childish, just like the honey badger meme he refers to or a school kid who convinces his classmates that his teacher is a pig just by repeating the absurd assumption.

Before the documentary ends on the foreboding note of Bannon’s links with Switzerland’s Front National and European populism, he is finally shown walking. Freed from the talking-head frame, he roams through destroyed, movie set-like houses while Trump’s inauguration speech runs, rather unsubtly, off camera. Bannon was seen in Venice on the day of the film’s premiere, and his planned participation in the New Yorker festival led many speakers to cancel or boycott the event. Fighting Bannon’s ideas does feel like exhaustingly, pointlessly tilting at windmills. It is therefore perfectly understandable that some should decide to abort the mission before even starting. Yet when the ideas—and therefore the existence—of so many other people are at stake, understanding becomes the preliminary, if not foundational, weapon to exercise opposition. Although not entirely successful, American Dharma is a first step in that direction.