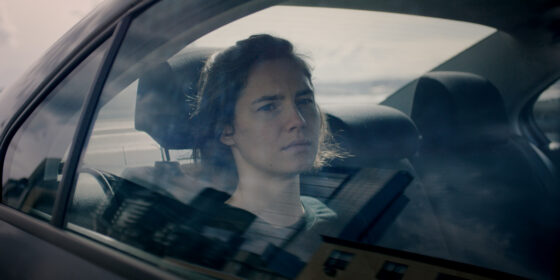 What’s finally most objectionable about Amanda Knox is encapsulated right in this glossy and obnoxious film’s title. Its fundamental sensationalism bubbling under a patina of seriousness, exemplified by cocoon-like, squarely composed, quasi-Errol Morris interview sessions, Amanda Knox revisits the botched investigation—and re-investigation—into the 2007 murder of Meredith Kercher, a British exchange student, in Perugia, Italy. As it happens, Kercher is the character in this story that clearly interested directors Brian McGinn and Rod Blackhurst least. While considerable portions of the film digress into journalistic ethics and responsibility and blah blah, McGinn and Blackhurst succumb to precisely the same fixation on the eponymous, wrongly convicted killer that tabloids like The Daily Mail did while reporting on the case. The then 20-year-old Seattle native Knox certainly possesses some sort of enigmatic, if not sociopathic, screen charisma, and it is precisely this quality that allows her to control the narrative. It’s like a fascinatingly bad Jodie Foster performance: you believe nothing but you can’t stop watching. Knox overemphasizes, cries, gets angry, defends herself and feels sorry for the victim at all the right/wrong intervals, while the co-directors lap it up and question little. There is, of course, plenty that’s gripping here, especially the interview sessions with the equally creepy Perugia prosecutor Giuliano Mignini, but Amanda Knox’s interests remain resolutely on the surface of things.