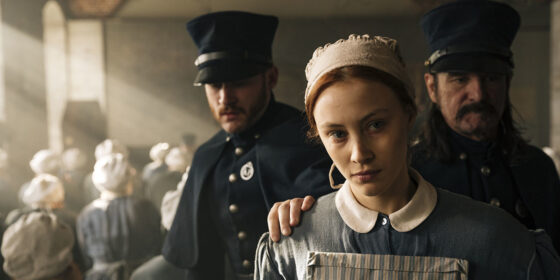 Margaret Atwood’s most genre-bending, postmodern novel gets a mostly straightforward Victorian adaptation in Mary Harron’s CBC-bound miniseries Alias Grace, at least on the basis of its first two episodes. Atwood has a lot of fun with the lurid rubbernecking appeal of the story of Grace Marks (Sarah Gadon), the maid turned prisoner and “celebrated murderess” who may or may not have been the brains behind a grisly double murder that claimed the lives of her employer (the so far barely glimpsed Paul Gross, one of two Canadian directors cameoing here, along with David Cronenberg) and his housekeeper and potential lover (Anna Paquin). By contrast, Harron’s version, doggedly and at times lyrically ported over to the screen by Sarah Polley—who gets the novel’s form but doesn’t always grasp its elusive tone—feels overly genteel, cleanly hitting its comic beats and drawing the requisite guffaws from its ironic voiceover at the expense of some of the uglier and more interesting contours of the text.

The overall approach here seems off-centre, the filmmakers apparently weighed down with the task of making some of the novel’s more self-satisfied literary moments work when they could just as easily be discarded. That isn’t to say that Harron’s quick cuts to traumatic moments that violently interrupt the series’ many long two-handers in well-dressed rooms don’t capture something of the novel’s sense of duality. Glimpses of the irritable subterranean Grace surface in the middle of her placid account of herself in the series’ many story-time sessions, which see her sizing up and coolly regaling the psychiatrist who could set her free with a good report with her colourful biography, all while fashioning a new quilt. The series’ tonal strangeness and formal limitations are also balanced at least in part by the handsome production values—cinematic by the broadcaster’s standards, if incongruous with the narration that threatens to turn it into a radio play—and Gadon’s wily performance, which strikes the right note between the knowing connivance of a remorseless killer and a space alien’s innocence about humans and their inscrutable hang-ups.