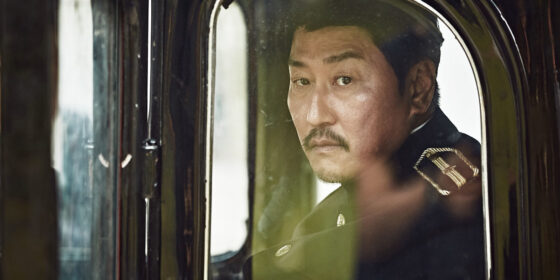 A satisfying cloak-and-dagger thriller set in Japanese-occupied Korea during the 1920s, Kim Jee-woon’s The Age of Shadows betrays a kind of business-like approach to spy games, institutional and otherwise. With an unobstructed point of view that moves swiftly between the upper echelons of the Japanese police force and the busy Seoul shopfronts hiding members of the resistance, everybody here is aware of everybody else’s scheming. The first half of the movie features an extended series of briefings and meetings—admirably accessible for a film that’s a giant balancing act of mainstream, genre, and historical necessities—staged with controlled urgency, so much so that you half expect each player to reach for the game clock after getting out of a car or an office.

The resistance dreams of independence and resorts to bombings, while the Japanese authorities task a Korean officer (Song Kang-ho, hiding vast reserves of guilt and sorrow under that long, black coat) with flushing them out from the inside. Loyalties quickly begin to wane, and there’s room for some understated, warm brilliance in pairing up some of the characters under DP Kim Ji-yong’s ubiquitous yellowish lamps. The fateful first encounter between Lee and the resistance’s key lieutenant, antiques merchant Kim Woo-jin (Gong Yoo), is a marvel—and it needs to be in order to sell their crucial relationship later on.

As solid as the setup is, the outstanding section of The Age of Shadows is the central one. To merely call it an exciting set piece on a train running between Shanghai and Seoul doesn’t quite capture the extent of its classical meticulousness. Taking its time at the start of the ride, and explosively capping it off at the end, it reaches Snowpiercer (2013) levels of intensity in just over 20 minutes. Editing, direction, and the striking production design offer top-notch support to the script’s turning point, with double agents and resistance moles all threatening to unmask each other in tight corridors.