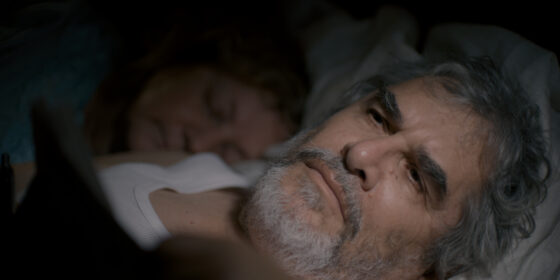 The halcyon days of a recent vacation to Namibia linger in the mind of retiree and former engineer Meir (Meir Gerner), the grumbling 68-year-old father of the filmmaker whose depressingly impotent mad scramble to regain purpose in life is the subject of this debut feature. Working in the space between fiction and documentary, director Oren Gerner imposes a loose narrative on this stretch of his father’s life by building towards a climactic local ceremony; the film, however, begins with the realization that Meir has been shooed out of his habitual role after decades of involvement in the yearly tradition.

A Scrooge type living near the border of the West Bank with his wife (Maya Gerner), a practicing therapist, Meir spends his days taking his German Shepherd on walks, working on carpentry projects for his loved ones, and volunteering with other retirees on the community night patrol. Meanwhile, a few alarming trips to the doctor exacerbate Meir’s sense of disrepair and obsolescence. Lanky, foul-mouthed teens and indifferent grandchildren are the villains here, and while intergenerational malaise and the anxiety of transition comprise the Big-Picture takeaway, these concerns scan as platitudes within the film’s simplistic appraisal of ol’ Meir’s trials and tribulations. Flashes of introspection and violence, almost always involving Meir’s beloved canine companion, complicate this otherwise conventional political allegory of a changing Israel, but even some authentically touching moments and handsome static shots (their stagnancy expressive of Meir’s languishing inner self, while restless youngsters around him are practically teasing with their displays of physicality) aren’t enough to distinguish Africa from similar tributes at half mast.