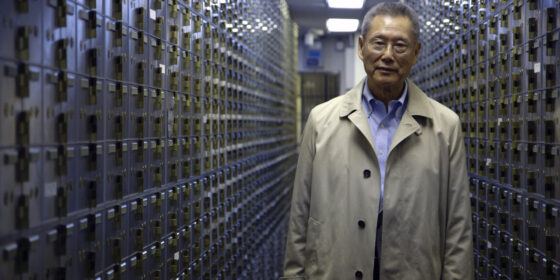 Most of the films related to the 2008 financial meltdown (documentaries and features) have assumed an audience thoroughly cowed by the very topic. In fact, the films themselves have often seemed flummoxed by their very subject, doing their best to present the complexities of 21st-century international finance in broad strokes and simple language. This is a worthy goal, but it’s not just the nuances that get lost in this continual rehash of The Big Picture. We don’t see how particular individuals and institutions created the crash and how they were in turn affected. Part of this is due, no doubt, to the fact that private firms won’t volunteer any information that isn’t subpoenaed. We may never get a comprehensive history of what really went down at Lehman Brothers, Bear Stearns, or Countrywide.

On the other hand, thanks to Steve James and the Kartemquin group, we know all about Abacus Federal Savings Bank, a small lending institution based in New York’s Chinatown. Founded by attorney/community pillar Thomas Sung and managed along with his daughters, this local bank became the target of an expansive fraud investigation by the New York City D.A.’s office. (Ironically, another Sung daughter was working for the D.A. when the indictments came down. She resigned in disgust and went to work for Abacus.) While it was clear that one short-term employee had in fact committed embezzlement and fraud, the state felt that it could make an example of Abacus, using the Sungs as surrogates for the JPMorgan Chase and Bank of America executives who’d gotten the equivalent of a presidential pardon.

Small Enough to Jail is made with the Sungs’ cooperation, and makes no pretense at being neutral. James lets all the major players speak for themselves, but it becomes clear that the case against Abacus management was circumstantial at best. But more damning is the blinkered racism that D.A. Cyrus Vance and his team employed against the Sungs and their associates. It’s not just that the defendants were marched through City Hall on an actual chain gang—a photo op staged by the prosecutors to humiliate the Sungs into copping a plea, one they knew would be particularly effective against prominent Chinese-Americans concerned with “losing face.” (As one of Abacus’ attorneys notes, they never would have thought of doing such a thing to African-American or Latino defendants.) The whole case, one senses, was predicated on a stereotypical assumption that nailing the “docile” Chinese to the wall would be easy. But as one Chinatown old-timer says to Thomas, “it’s good that they did this to you. You’re a fighter.” Damn right.