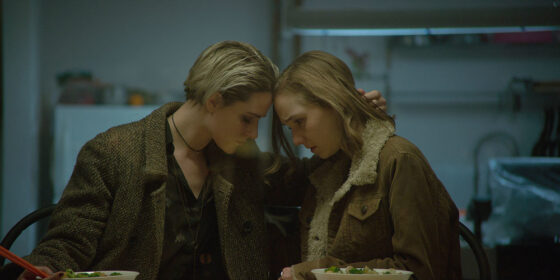 Evan Rachel Wood works hard to put on a tough face in Carlos and Jason Sanchez’s unconvincing debut feature, the kind of miserablist festival fare that has given English Canadian cinema a bad name for too long. Wood stars as Laura, a thirtysomething house cleaner with unsavoury sexual appetites (so a moralizing opening set piece about the horrors of rough sex tells us) and a grim family history that she tries to transcend through the peculiar strategy of grooming and kidnapping Eva (Julia Sarah Stone), a 16-year-old runaway bound for a rigid life in classical music. That all changes when the budding prodigy, looking for a way out of a future with a new stepdad and half-brother, is intercepted by Laura, who falls in love with her young charge and makes a claustrophobic new life for them.

The photographer-turned-filmmaker brothers have a decent collective eye for memorable images, like a recurring motif of the leads sinking through pink-tinged water that’s mildly impactful despite being ported out of Under the Skin. They especially show some panache at photographing their waif-like stars dancing in neon light, another visual element that seems to be so incessantly repeated more out of a desire to stage photo shoots with the unnervingly young-looking Stone than out of anything necessitated by the plot. Those inklings of potential aside, this is a dire affair, cobbled together from dangerous received wisdom about how incest breeds pedophilia and depression and working-class drudgery turns lesbians into predatory shells of people. Wood and Stone try their level best to raise the dramatic stakes of an inert story that can only end one way (and Denis O’Hare finds a bit of Ray Wise’s complexity in his familiar portrayal of a father who hasn’t done right by his Laura), but the cast can’t elevate this thinly sketched and ultimately insulting material.