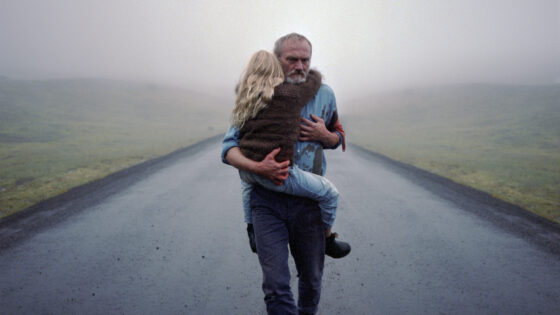 When the Icelandic fog is particularly thick and obscures the landscape, the dead can speak to the living—so says the eerie epigraph that opens Hlynur Pálmason’s A White, White Day, which unfolds as a meditation on grief and violence. It’s this kind of dense fog that can cause a car to slide around a mountain road, through a guardrail and off a cliff, or obscure the mountains that lie directly behind a small, rural house, making it seem unmoored in space. After his wife dies in that crash, police officer Ingimundur (Ingvar E. Sigurðsson) becomes consumed with grief, until the only visible emotions he displays are vague irritation with everyone around him and gestures of kindness toward his eight-year-old granddaughter Salka (Ída Mekkín Hlynsdóttir), who often stays with him. He continually remodels his house by the mountains, and the chaos of permanent construction echoes his broken, suffering heart.

Ingimundur’s internal pain inevitably externalizes into violence, in the form of an obsession with a neighbour he believes was having an affair with his wife before her death. There’s no question that the crash was an accident, but Ingimundur, an emotional masochist of Bergmanesque proportions, needs to know the truth about her affair, which spirals out into extreme abuse of his police power (no surprise, indeed) to get the answers. Pálmason inserts a little Roy Andersson-type Scandinavian strangeness into the proceedings: the fog remains an otherworldly motif, but a bizarre recurring vignette from a children’s TV show about death doesn’t quite work as intended. These digressions aside, A White, White Day is at its best when it delves fearlessly into the cold heart of lonely masculinity.