A Star is Born (Bradley Cooper, US) — Gala Presentations 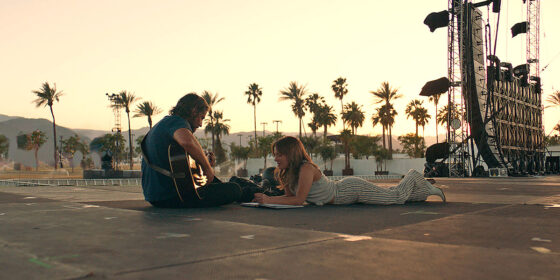 In the era of the self and the ubiquity of digital images, the print billboard has been perhaps replaced by the multiscreen. Both types of visual support make brief appearances in Bradley’s Cooper remake of A Star is Born, and yet—just like the film—both elements stay on the surface instead of exploiting their symbolic implications. In one of Ally’s (Lady Gaga) first official performances, Bradley Cooper’s Jack plays the guitar near the background of the stage, where a gigantic screen is showing live footage of Ally’s face. Less for the sake of aesthetic criticism and more for realistic purposes, the texture of the LED screen splinters the protagonist’s features into fragments, revealing the flaws of the technology. The faceless crowd seems unconcerned with the visuals, nor is Cooper’s directing debut interested in revealing the tricks and tics behind the music business. Who indeed allows a new perspective on her persona is Lady Gaga: while still incarnating the archetype of the superstar performer, her moles, her unflattering angles and imperfections are displayed “up close and personal,” to quote the title of another film scripted by John Gregory Dunne and Joan Didion.

Notoriously, the literary duo also wrote the original story for the 1976 Streisand & Kristofferson SiB remake by Frank Pierson, which has aged badly. Legend has it that the involvement of Jon Peters—an allegedly illiterate hairdresser-turned-producer, and Streisand’s boyfriend at the time—flattened the script to the point where Kristofferson could utter lines like “You’ve got a great ass.” The word “ass” returns in the latest version, yet this time—to the distaste of her rockstar husband—it is sung by Ally during her first show on Saturday Night Live. To his credit, Cooper (who co-adapted the script with veteran screenwriter Eric Roth) did make an attempt at purging the film of the macho sexism that marred its forerunner. Jack is careful to avoid striking his newfound muse, and is the greatest (yet not the only) victim of his own envy disguised as self-destruction.

Aptly, Lady Gaga’s gay fanbase is honored in the venue where Jack sees Ally sing for the first time, and it feels empowering to situate the first sparks of love in a queer environment. But the rest of the film leaves little to ambiguity: classic rock performances dominate the first half, and Ally is already a celebrated artist in the second. She is the only woman in a world of men, and although this may have been scripted to build a stronger character, it feels like a remnant of mansplaining. While hints of the 1976 version are scattered throughout the film (the bathtub scene, luckily updated; the Arizonian fields; remarks on the “big” nose of the female lead), A Star is Born is devoid of depth. It feels like a missed opportunity, since its core subject offers many cues to tell a contemporary story: the labour behind a career in the entertainment business; the negotiation of roles within a couple experiencing different degrees of success and failure; the legacy of family history and addiction. As the two musicians sing their hit “The Shallows” together, one wonders if they shouldn’t perhaps have swum in the deep end.