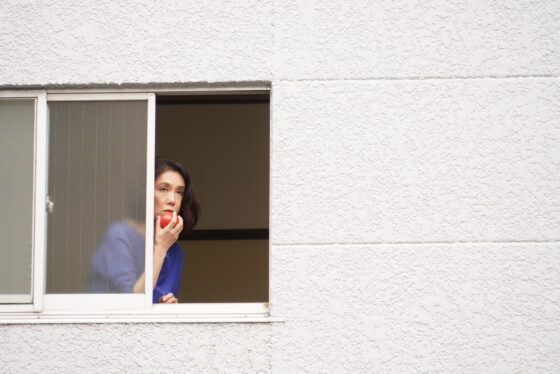 A Girl Missing opens on Ichiko (Mariko Tsutsui), a mysterious middle-aged woman whose strange actions are progressively explained in long flashbacks to her former life. In the present, she is a seductive femme fatale living alone in an empty flat, who only ever smiles in the most polite and artifical way and never does anything without an ulterior motive. In flashbacks, she is also polite, but seemingly out of genuine kindness. Working as a home-care nurse for the wealthy Oisho family, she not only takes care of the elderly grandmother, but also helps teenager Motoko (Mikako Ichikawa) and her younger sister Saki (Miyu Ogawa) with their homework after hours.

Though always lovely and kind, Ichiko has one flaw: she is utterly blind to Motoko’s affections, repeatedly and inadvertently hurting the young woman’s feelings. Still, this shortcoming appears harmless enough—until a surprisingly dramatic event suggests that this lack of perceptiveness may be profoundly dangerous. After Saki is abducted and then found weeks later, her kidnapper is soon revealed to be none other than Ichiko’s own young nephew. The nurse is the one who introduced the two teenagers.

A Girl Missing is too smart to make the wild logical leap between dramatizing Ichiko’s basic naiveté and implicating her in complicity in a kidnapping. In fact, no one in the film ever explicitly makes such an accusation. But while Ichiko’s friends, colleagues, and family might understand that she did nothing wrong, they can see that it looks bad, and it is her unawareness of such appearances, and their importance, which they hold against her. Optics are enough to ruin someone’s life—something which the present-day Ichiko, with revenge on her mind, understands only too well. The film veers into thriller territory as we follow the woman, utterly transformed, going through with her sadistic plan. Fukada’s film is mad but wildly engrossing, imagining a cruel world where unrequited love plus time makes for a fatal sum.