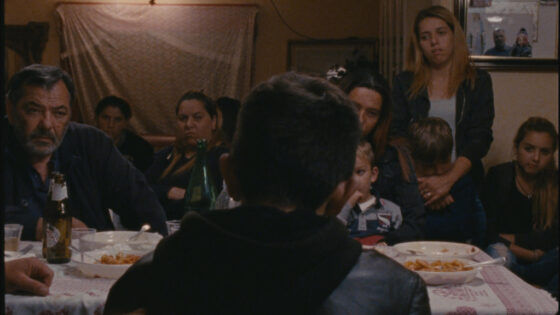 In case you had any question as to what to expect from A Ciambra, the latest film from Jonas Carpignano (Mediterranea), the TIFF catalogue description clears things up. In a scant 236 words, we are given the following: “unadorned,” “highly naturalistic,” “verisimilitude,” “gritty reality,” “raw vitality,” “stark reality.” Add in the fact that this an Italian-based story, made by an Italian director, focusing on a family of nonprofessional actors who are playing fictionalized versions of themselves, and you have a fairly clear idea of where Carpignano is coming from.

When the film and its champions are leaning so hard on this classical notion of Italian realism (it isn’t so “neo” anymore), it’s almost crying out to be unpacked. Without a doubt, A Ciambra fits in with contemporary realist tropes, with extended shots, a fair amount of handheld camera, and an offhanded sense of blocking and framing. But the film’s narrative organization tells another story. Ciambra refers to a Romani camp in southern Italy, where the Amato family resides. The Amatos are a huge brood, but the film is centred on 11-year-old Pio (Pio Amato), who is growing up in this environment of lawless survivalism. His brother Cosimo (Cosimo Amato) in involved in various criminal enterprises, and Pio wants in on the action, even though everyone thinks he’s just a little kid. Pio sets out to prove them wrong.

With its joy-before-the-storm music montages, reliance on stereotypical characterizations, and even a moment of Griffith-style cross-cutting, A Ciambra is far too bound to cinematic convention to be considered “unadorned.” Carpignano’s work reminds us that “realism” is little more than a stylistic choice, one among many. But even more than this, A Ciambra is organized according to broad, easily recognizable patterns, and it seems to use the realist style in order to obscure this conventionality. After all, not only is this Pio’s coming-of-age story (the film has every potential for a wide, dispersed point of view, yet nevertheless always comes back to him), it is also staged as a loyalty test between tribes. While Cosimo is in the slammer, Pio becomes friends with Ayiva (Koudous Seihon), an immigrant from Burkina Faso; after his family has quite pointedly told him just how bad Africans are, Pio learns that racism is wrong, which unfortunately is not a practical lesson for his survival. So in addition to adhering to standard boy-meets-world patterns, A Ciambra also provides a bittersweet lesson on the perpetuation of prejudice. With a different kind of filmmaking approach, A Ciambra would be recognized for the middlebrow humanism that it is. Lest this seem fully pejorative, let me make it clear, A Ciambra is a very fine piece of middlebrow cinema, and I fully expect Carpignano to be working in Hollywood before all is said and done.