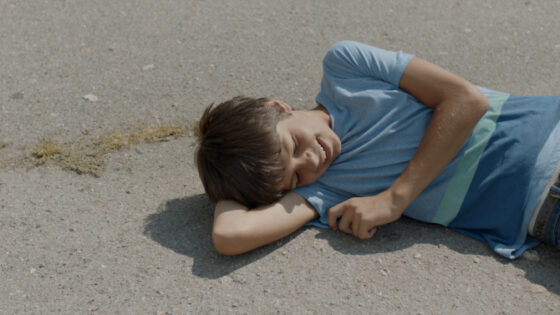 Ilian Metev’s fiction debut, following his award-winning 2012 documentary Sofia’s Last Ambulance is a touching portrait of family relationships that explores the lives of a physicist, Todor (Todor Veltchev), and his two children, Niki (Nikolay Mashalov), an energetic and imaginative teenage boy, and Mila (Mila Mihova), a talented young pianist preparing for an audition to continue her studies in Germany. The children’s mother—the implicitly absent one-quarter referred to by the film’s title—remains unseen throughout, though she does not go unmentioned: Mila and Niki talk about her in an early scene, indicating that her  simultaneous presence (in their lives) and absence (in the film) has left an important and  mysterious trace.

3/4 is a small but ambitious drama with a perfectly symmetrical structure, using minimal means, nonprofessional actors, and everyday conversations to convey its characters’ innermost feelings. Through unobtrusive, documentary-style camera work, limited onscreen spaces, and ellipses, Metev works subtly to reveal the misunderstandings, fears, and anxieties of characters, tying his style closely to their interior states. Late in the film, Mila asks her father if he is lonely; he doesn’t understand the question, so she corrects herself: “Have you ever felt lonely?” Todor finally answers, but Metev’s stark medium-shot aesthetic in the previous sequences—the way he visually isolates his protagonist even when Todor is surrounded by colleagues and friends—has already anticipated his reply.