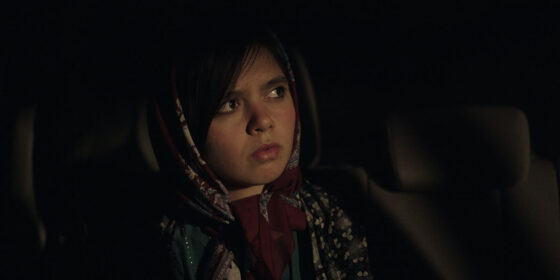 Of all the films that Jafar Panahi has made after being officially banned from filmmaking, 3 Faces is the one most visibly influenced by Abbas Kiarostami. After watching a video phone message in which a young girl, an aspiring actress named Marzieh, attempts suicide, Panahi and actress Behnaz Jafari take a road trip to the girl’s village in northwestern Iran to investigate what happened to her. Besides the car scenes, which are those obviously indebted to Kiarostami, the plot in the first 30 minutes is reminiscent of Life and Nothing More…, and after the pair enters the village and starts looking for the gone girl, the film takes after The Wind Will Carry Us. In one of the film’s few impressive scenes, as twilight turns into darkness, the older actress Shahrzad’s poem is recited over top of a static shot of her small home, which reminds us of one of the famous scenes in The Wind Will Carry Us, in which the filmmaker protagonist recites Forugh Farrokhzad’s eponymous poem for a young girl.

What 3 Faces lacks is Kiarostami’s subtlety in creating tension between fiction and documentary, acting and non-acting, and between his own role as mere observer and as the powerful director who shapes reality. In Kiarostami, it is difficult if not impossible (even for an Iranian audience) to recognize if the non-actors are improvising or are acting off a written script. However, the conversations in Panahi’s Taxi and 3 Faces are so banal and mechanical that it is easy to conceive that every encounter is staged to symbolize a political/social meaning.

Panahi sets out to explore themes of patriarchy, masculinity, and sexism in the traditional parts of Iran, which is undoubtedly crucial and very urgent in a country that still treats its women as inferiors. The idea of bringing together and confronting three women from different generations is very intriguing, especially when the public image of the retired actress, Shahrzad, is compared with the renowned Iranian actor Behrouz Vosughi. The former has suffered in Iran’s patriarchal film industry and now is forgotten and abandoned; the latter, meanwhile, who lives in exile in the US, is still praised by a male villager because of his virility.

In contrast to Panahi and Jafari, who play themselves, the villagers are not depicted as complicated human beings: they are merely allegorical figures who seem bizarre, stupid, and extremely superstitious, which gives the film a patronizing tone. For example, the young man’s violence and misogyny towards his sister, though not rare in traditional Iranian families, cannot impress or overwhelm viewers (especially Iranians). We should expect something more from the filmmaker who once directed expansive, empathetic works like Crimson Gold and The Mirror, and who even made two genuine and deeply unnerving films under house arrest, This Is Not a Film and Closed Curtain. Instead of trying to make a certified copy, Panahi should just be himself.