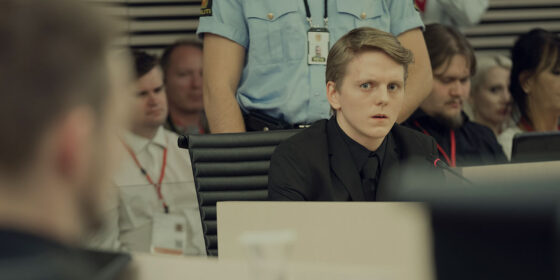 The only mild surprise that 22 July has in store is its narrative emphasis. After 32 minutes, the horrific acts (the bomb in Oslo, the massacre on Utøya Island) are all done, the teenage corpses have piled up, and Norway has plunged into a deep political and moral crisis—leaving 101 more minutes to go, and long will they be. Unlike Erik Poppe’s singularly pointless, pseudo-humanistic shoot-‘em-all-down-movie U – July 22, which screened at this year’s Berlinale, Paul Greengrass’ take on the murderous deeds of right-wing extremist Anders Behring Breivik in the summer of 2011 is more interested in the aftermath of the crimes than in the deadly terror they mobilized.

Unfortunately, the legal proceedings against Breivik (and the improvisational political workflow around noble prime minister Jens Stoltenberg) are not that gripping either, given Greengrass’ severely questionable wish to grant Breivik (played by a predictably chilly Anders Danielsen Lie) not only numerous “cool” retorts in his dialogue with his lawyer, but also decidedly more presence than the real, uncharismatic lunatic who was put to trial in 2012. So the grief work, the healing processes among the survivors and the bereaved become the main object and purpose of 22 July: Greengrass devotes a lot of time to the psychological struggles of a badly wounded and traumatized boy (Jonas Strand Gravli) whose family tries hard to come to terms with the new situation. While Poppe’s Utøya exploitation mainly showed how inapt and downright obscene the mechanisms of the slasher/thriller seem when applied to an actual tragedy, Greengrass demonstrates the uselessness of industrial melodramaticism in this context (even if it is fashionably toned down). 22 July is an underwhelming experience and, with all its doubtless good intentions, also tiringly conventional.