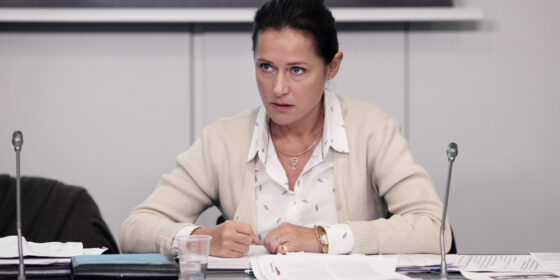 Even if Emmanuelle Bercot’s stultifying biopic 150 Milligrams weren’t based on a true story, its outcome would anyway be clear from the outset: when feisty provincial doctors take on the system, convention demands that they must win. Bercot doesn’t seem to have a problem with embracing total predictability however, given that she breaks down French lung specialist Dr. Irene Franchon’s fight to get an approved drug banned into a series of episodes of mind-numbing similarity. Again and again, Franchon (played by Danish actress Sidse Babett Knudsen) presents her findings to some commission or another, they are swiftly pooh-poohed, there is talk of ruined reputations or even legal action, before it’s suddenly announced she was right all along, thus ushering in some polite whooping and the next battle, with each stage in the identikit arc receiving additional emphasis via the requisite tense, sad, or uplifting music.

While any actress would be pushed to extract a degree of nuance from such a repetitive structure, Knudsen goes so far in the other direction that her performance succeeds in pushing 150 Milligrams from the merely irritating to the actively excruciating, an unholy mix of zany pratfalls, barked dialogue, and exaggerated facial expressions that inadvertently generates empathy for the suits seeking to crush her. Aside from the fact that Franchon’s annoying manner never seems to unduly impinge on her colleagues and family, the only other surprise in a film otherwise devoid of them is Bercot’s unusually graphic approach to showing bodies being cut up, with Franchon’s most beloved patient having her chest cavity bizarrely opened up in full view of the camera before her organs are passed around for inspection. Yet for all Bercot’s apparent ease with slicing and dicing, she ultimately brings precisely none of it to bear on the format of the biopic—a patient truly in need of some serious surgical intervention.