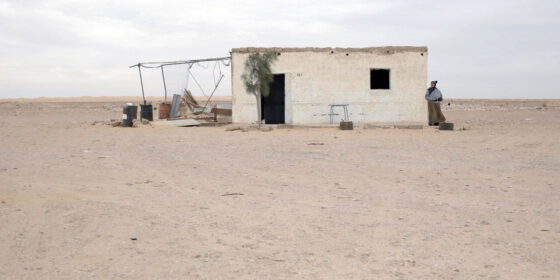 Hassen Ferhani’s crowd-pleasing second feature is an example of a familiar format being executed with such intelligence and clarity that you wonder why it happens so rarely. The entire film is built around a woman almost as formidable as Vitalina Varela, and just as much of a magnet for the camera: the corpulent, whip-smart Malika, who runs a small roadside café on National 1, the country’s main highway, which connects Algiers in the north to Tamanrasset in the south and runs right through the Sahara desert along the way. This 20-metre-square hut in the middle of nowhere is both business and home for Malika, her dog, and her cat, as well as a welcome stopping-off point for truckers and other transients alike, most of whom are already well-acquainted with the loquacious sexagenarian businesswoman.

While the furthest 143 Sahara Street ever strays from Malika’s miniature realm is the gas station being constructed little more than a stone’s throw away, this stark, isolated setting which she is never seen to leave proves more of a virtue than a restriction. Ferhani has an innate grasp of all the parameters that can be varied in and around this one location— inside/out, night/day, noise/quiet, stillness/activity, strangers/friends, distance/proximity—and keeps them moving with almost mathematical precision, throwing up more than enough different permutations to ensure that fresh angles always emerge and the interest never wanders. Garrulous encounters thus give way to periods of solitude, lengthy silences usher in traffic sounds or impromptu dancing, and neon light takes over from the desert sun.

Each set of people that call upon Malika also functions as a slow drip-feed of information about the country and the woman herself in equal measure—a portrait of person and place as one that is at once organic, far-reaching, and unusually entertaining. And perhaps most gratifyingly of all, there’s never any sense that the film is anything other than a meeting of equals, as Ferhani’s various interventions from behind the camera to translate or clarify demonstrate an entirely different stance to that of the invisible, omnipotent presence common to so many documentaries, while Malika herself seems well aware that she’s just as capable of steering the proceedings as he is. In fact, the obvious lie she tells towards the film’s end suggests she’s perhaps even one step ahead: natural performers like her are more than familiar with the conventions of the stage.