Albert Serra/50 Best FIlmmakers Under 50, CS50, From The Magazine 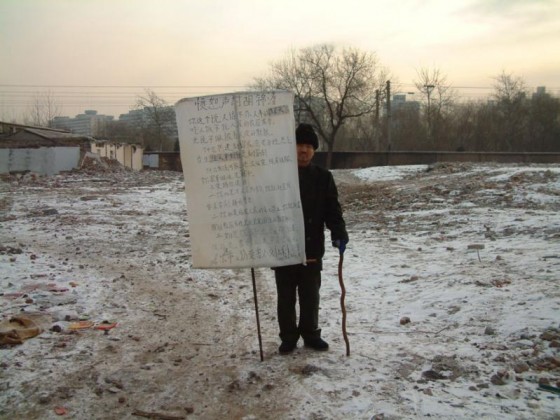 For China, Zhao Liang is the poet of justice. All his works deal, directly or indirectly, with this topic with a distinctive gentleness. The demagogic, the obvious, and the commonplace don’t exist for him. Be it through the use of violence (the pieces of human flesh of the woman run over by the train, shot in close up in 2009’s Petition), the humour, always lyrical and unexpected (the interrogation scenes of the scrap merchant in 2007’s Crime and Punishment), the sensuality of the textures (the nighttime shots lit up with a flashlight in Petition), or the editing, his images always transcend the banality of the document. Despite being strongly engaged with the sad reality of his country, Zhao Liang’s images aren’t a description of reality; they are a hymn. It is the only way to subvert, of not being a slave to his own testimony. Zhao Liang cannot simply describe social injustices, lies, abuses of power…because as an author he’s realized that “reality” itself is unjust and abusive. And it’s absurd to find a way to fight against it because reality has as much power as the “system” does in China.

Zhao Liang’s patience must be the same as the patience of the litigants of Petition, as seen in his labourious, morose working method, but his objective is the opposite. You can’t challenge reality (because you risk ending up like the community of litigants), so you have to sing it. To the point of looking for beauty in what is unjust? Yes, even to that point. Reality—in other words, power—can easily assimilate its own critique, but not its hymn, which will always be the property of the poet. With any other topic he could have been involuntarily serving the propaganda of what he’s criticizing, but the issue of the absence of justice turns our hearts with so much power that this is impossible. It’s an issue that can’t be read in two ways because the facts that Zhao Liang describe are flagrantly indisputable (and therefore, impossible to manipulate, even though contemporary pessimism, since the birth of the audiovisual, tell us that everything is). In spite of this—and much to his regret, I imagine—because of his formal strength, his inspiration, Zhao Liang has become not the poet of justice, but the poet of injustice (he doesn’t criticize, he sings)…affirming the superiority of art and the artist over the rest of the mortals.