Chris Fujiwara/50 Best FIlmmakers Under 50, CS50, From The Magazine 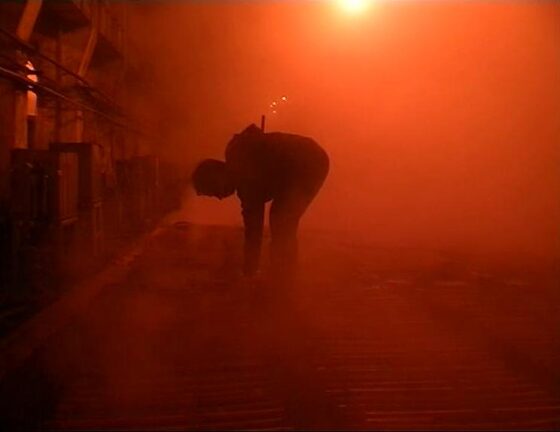 West of the Tracks

If there is a science-fiction element in Wang Bing’s work, an attempt to imagine unimaginable (though real) conditions for human life, there is also a war-movie element, a working-over of the terrain, together with the becoming-mineral of humanity that recalls the hard-bitten, antiheroic sagas of Samuel Fuller, Anthony Mann, and Miklós Janscó. But even more than Janscó, Wang steps back from what he depicts. For Wang, there is always the need to locate human figures in space and to allow the audience to locate itself in relation to that space. This double process requires time, and it might be said that the subject of Wang’s films is mainly this, how space becomes a screen of time, and how the paths of people through the space—across, toward, in, out, or simply dwelling within (as in 2007’s sublime Fengming, a Chinese Memoir)—write duration.

The recovery of history that is central to Wang’s project is also an investigation into the deposits left by time. The Ditch (2010) is a pocket of time that is abandoned, desolate, horribly pitiful, and that has intentionally been left unfinished: a route of history that the Chinese government has designated as a route to nowhere, and that the film undertakes to recover. When history changes course, what happens to those who are stuck on a previously determined route whose destination lies somewhere off to the side of what is decreed to be, henceforth, history? The same question is asked in West of the Tracks (2003). The answer to the question is the form of the film itself: the framing of the image, Wang’s reluctance to dictate when enough is enough, and his insistence on the letting-be of details that may or may not be immediately expressive, but whose potential value lies in their belonging to a hidden reality rather than to an order of mise en scène.

We can give this reality a name: labour. Everything in Wang’s films is labour: a woman narrating her own biography; a man cleaning, paring, and cutting a vegetable or assembling some bedding (Man with No Name, 2010); the derisory struggles of the condemned men with the land in The Ditch; the industrial labour to which Wang devotes so much artistic energy and care in West of the Tracks and Coal Money (2009). If Wang’s cinema is dedicated to uncovering the past of labour, it is also a search, in the middle of an era when labour is being disavowed, disgraced, and denied, for the possible futures of labour.