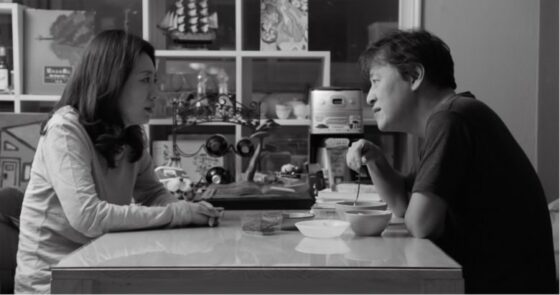 With its wonderful Whitman-inspired title, On the Beach at Night Alone gave us one of the year’s most indelible images, so crushing, mournful, and beautiful in its abandon: Kim Minhee’s character Younghee lying forlorn in the sand on a cold beach. The solemn distress and physical destitution occasioned by Liebeskummer was palpable in her dignified collapse. Jean Grémillon’s masterpiece Remorques (1941) came quickly to mind, with Michèle Morgan elegantly splayed and emotionally distraught on a craggy beach in Brittany, tempered melodrama seeping into the sand as the complexities of an affair intensified gravity’s weight. More than any other of Hong Sangsoo’s female protagonists, Minhee quite literally embodies “the woman on the beach,” to reference another of the filmmaker’s titles in an oeuvre whose variations on a self-reflexive theme have increasingly become more revealing, more raw, and also more devastating.

Kim deservedly won Best Actress at the Berlinale for this tremendous performance of a headstrong yet sensitive actress, whose affair with a married filmmaker has occasioned existential confusion, a sudden fixation on aging (and maturation), and a wondrous if painful sense of paradoxical freedom (or sense of drift). Her crisis inheres to moments of surrealism as if reality and utter disappointment could be staved off by a searching will to survive, a halting, ebbing desire to continue to see beauty in the world, and hence, to retain a sense of hope. But the film is wintry and dark, and a deep sense of melancholia and loneliness courses through it despite surprising moments of levity and dreamlike whimsy. That the much-gossiped-about off-screen romance between filmmaker and actress was given a public stage in Berlin only served to intensify the personal readings of the film, and, perhaps, its nakedness. Hong’s soju-soaked cinema has consistently pointed toward his own foibles and the “art imitates life” adage has been somewhat tediously and inevitably applied to his filmography ad nauseam. But regardless of where the truth lies, the filmmaker’s resolve in the face of public opposition and scrutiny in Korea has yielded some of his greatest films to date.

One of today’s most prolific feature filmmakers, Hong had two films in Cannes, and the two were starkly different despite metonymic resonances and threads of dialogue that could have conceivably emerged from either and/or both. Claire’s Camera stars Isabelle Huppert as a sprightly high-school music teacher in Cannes for the (hilariously) first time, tagging along with a friend whose film plays at the festival. As Claire meanders the cobblestones of Le Suquet, she has a series of encounters occasioned by her wanting to take a person’s photograph. Drawn by Manhee’s (Kim Minhee) ethereal beauty, she learns that the former sales agent was recently dismissed due to her “lack of honesty.” Turns out it was Manhee’s one-night fling with So (Jung Jinyoung), the director whose film she’s selling that set off the jealousy of her boss, who, in turn, is romantically linked to the hard-drinking filmmaker, who, in turn, confesses that “95 percent of the mistakes [he] makes in life are caused by alcohol.” Claire, with time on her hands during the world’s busiest festival, also meets the filmmaker, and the two are likely the only guests in Cannes history to set foot into the local bibliothèque, where he pulls out Marguerite Duras’ collection of confessional and pining dialogues with her lover Yann Andrea, C’est tout. Remarking upon the book’s lyrical beauty, they recite passages outside in the sun as a means of improving Director So’s English.

It’s all rather breezy (literally, with hair blowing in the wind), and even a bit clunky, but never without charm and fascinating idiosyncrasies. While crafting his desultory tale of self-discovery and the vicissitudes and vagaries of artistic creation, Hong cleverly distills the festival-insider experience, showing us the least crowded nooks of Cannes, from a Spartan beach and an empty café to the corner of the sales agent’s office—a sliver of the Yourself and Yours (2016) poster edge of frame. There’s the lounging, elegant café dog named “BoB,” some absurdly basic song lyrics (here, everyone is an artist), plenty of walking, and the usual dust-up of jealousies and Rohmerian discours on amour. Honesty and transformation are charged, recurring notions that find solemn and serious treatment in Hong’s more compositional and weighty Competition entry, The Day After.

Shot in ashen black and white and replete with stage-like exits and entrances, The Day After forms an interesting (yet aesthetically unmatching) pendant to On the Beach at Night Alone. Bongwan (Kwon Haehyo) is the director of a small publishing house and author of some renown, who has (or had—the timeline is deceptive throughout and subtly disorienting) an affair with his sole female employee. During the course of one extremely eventful day—in which time seems to be elastic, falls in on itself several times, and ushers in myriad dislocated, Proustian flashbacks or visualized fantasies—Bongwan’s cowardly behaviour causes the successive humiliations of the triumvirate of women at the centre of his ever-heightening melodrama: his wife, his mistress, and his new employee, Areum (Kim Minhee, formidable) who bears the physical and emotional brunt of her boss’ self-centred amorous imbroglio.

Surprisingly under-esteemed following its Cannes premiere, The Day After constantly defies its own forward movement. Its literal non-linearity is itself a marker of time’s arrow, which can inevitably be tilted and zoomed in upon via subjectivity. Clocks and calendars permeate the mise en scène and the film’s eponymous day in question—is it the day all hell breaks loose, or the day after that, which arrives with an indeterminate amount of elapsed time?—is filled with as much ambiguity and interiority as it is bursts of emotion and grand declarations. (The Korean title translates as After That.) The Day After’s outsized, booze-fuelled passions are consistently cut by the sly subtleties of Hong’s writing and editing and the film’s restrained formal elegance, all of which do not constitute minor Hong. Haunted by a plaintive synthy score by the director, The Day After is sombre and troubling in its excoriation of a man whose inflated ego, infidelity, and passive indecision cause the distress of others and ultimately break something deep inside of him as he confronts his own weakness while (barely) keeping up appearances.

Each of the four characters seems on the verge of coming undone, aside from Areum, whose recent brushes with death have reinforced her desire to live and to believe in the beauty and goodness of this world. Amidst the cruelty and desperation displayed in the film—including the violent slapping Areum endures at the hand of Bongwan’s wife, who mistakes her for his mistress—Areum’s spiritual reckoning renders the film both tragic and sublime. She senses the fragility of her new boss almost immediately and confronts him about his sense of belief. “Why do you live?” she asks with a mixture of boldness and tenacious innocence. In one of Hong’s greatest monologues, she concedes that words are too crude to capture reality. “What is reality? If we don’t grasp it, it does not exist. Maybe it’s an illusion?…I know that I am not the master of myself, that I can die anytime and everything is okay.” This philosophical query underpins the entire film and ultimately is revealed to be religious when Areum thanks God for her peacefulness. Removed from her position when her spineless boss takes his mistress back, Areum is dispatched with a stack of books as a token offering. In the backseat of a taxi, she gazes outside the window as snow begins to magically fall, her face illuminated beatifically.

Are we to believe in love? Bongwan knew better than to respond with such a romantic notion. When Areum returns to visit her now prize-winning former boss, with the ground covered in snow, we are initially led to believe that it could be “the day after.” But Bongwan doesn’t recall who she is, and as he awkwardly asks her the same questions as he did on her fateful first day, it becomes clear that time has passed (though not before the fleeting sensation that we might be seeing the first day replayed a second time). That the tumult he caused her was so insignificant to him makes him all the more pathetic.

The Day After is built upon a number of minimalist and intimiste static set-ups, which take place at tables, Bongwan often seated to the right, as the camera pivots back and forth during loquacious verbal exchanges. As always, Hong avoids using shot-reverse-shot, the characters’ gaze steadfast on each other. In this story of infidelity, mistaken identity, drunken sorrows, and inner epiphanies, Hong, seemingly poised between quietude and suffering, veers toward an unmasking, yet alters the rules of the game. It may all indeed be an illusion, but one surmises that traces of sadness will last forever.

Posted in Columns, CS71, Festivals, From The Magazine, Spotlight