Denis Cote/CS50, From The Magazine 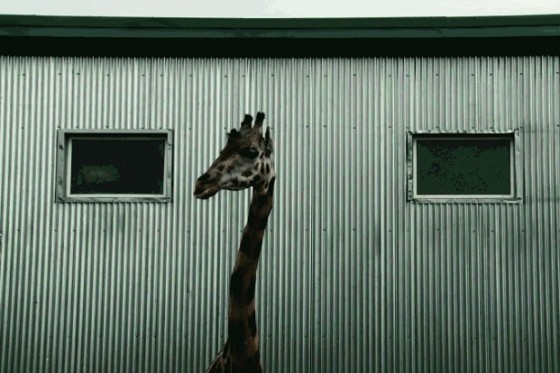 “God invented the cat to give man the pleasure of petting a tiger.”—Victor Hugo

The world of images confirms that we love animals in order to convince ourselves of our superiority over them. To reassure himself of his own humanity and to demonstrate his interest in beasts, both real and legendary, the man from ancient times would scribble down summary stories: bestiaries. Today’s man gorges himself on YouTube. No need to dwell on the entertaining virtues—often real—of wet kittens in the sink. But can we not lament the harm done by this display of curiosities taken on the fly to the precision of gaze that others so desperately chase? At the other end of the spectrum lies the illustriousness of National Geographic, Animal Planet, and other toadying televised inventions.

But where is the salvation between the puppies on YouTube and a boa constrictor’s reproductive cycle narrated in eight chapters? How should one look at an animal (and find a cinematic language specific to this act)? Is it possible to shoot animals other than through the lens of entertainment or for a non-educational purpose? Neither actor nor story catalyzer, cannot an animal be contemplated and filmed simply for what it is?

The cinema loves to ennoble animals, to plaster them with emphasis and artificial scenarios. And naturally, the audience is smitten with this aestheticization, as proven by the phenomenal success of Winged Migration (2001), March of the Penguins (2005), and Oceans (2009). Because we find it beautiful, it’s that simple! It’s a matter of communing with the species: the penguin waddling on an ice floe or struck silent during a storm will always have a radiant place in the world of public distraction.

What the cinema adores above all is anthropomorphism. From Benji to Disney by way of Tim Burton’s creatures, Babe, the pig, E.T. (let’s cheat a bit) or King Kong, the animal is us, our trials, our anguish, and our relation to the world. Reflections of our valiant as well as failed attempts, Lewis Carroll’s rabbit and La Fontaine’s fallacious fox can’t stop reminding us of our own shortcomings, which we are all too eager to forget.

Barbet Schroeder’s very beautiful Koko, A Talking Gorilla (1978) is a hymn to tolerance and communication. We catch the researcher Penny Patterson more than once referring to Koko as one of her offspring! In Nenette (2010) by Nicolas Philibert, the orangutan serves to reveal the comments and reflections of those who paid a sum to temporarily flee the boredom of their human condition. Weird as always and slightly out of step with the world, Werner Herzog, in the incredible Grizzly Man (2005), uses the footage of an improbable character (a kind warrior!) who gave his life in order to convince us that he was a bear. In Ulrich Seidl’s misanthropic and very head-on Animal Love (1996), the filmed doggies become the receptacles for human distress. If the semi-doc achieves in imbuing us with a sympathy for animals, its strange zoomorphism serves to succeeds the appearance of a sad race of sub-human suburbanites. What cinephile has forgotten The Story of the Weeping Camel (2003), with these humped, hairy near-humans and veritable semi-gods of the screen? Still, the indisputable quality of these films does little to hide the fact that they are as interested in delirium and asinine anthropomorphic equations as they are quiet truths. But does the animal exist outside of its propensity for being put in the perspective of human destinies and behaviours? And what if it were not a film star, and simply a living, breathing organism who drools, moves about, and sleeps? This, seemingly, is the question softly posed by Robert Bresson in the magisterial Au hasard Balthazar (1966).

The immense field of contemplative cinema offers elements of an answer. Replacing the psychologization and classical narration by an almost exclusively visual dramatization often leads to finding an exacting gaze and a distance deemed “respectable.” As if the camera (and all that stems from shooting) when pointed toward animals suddenly needed to find its perfect “intrusive humility.” When Artavazd Pelechian is at the controls in the overlooked masterpiece The Seasons (1975), he shows, with a quasi-lyrical brutality, the co-existence between Nature, Man, and the animals. Upon their backs and traversing a raging river, peasants haul sheep like they were sacks of sand. Never does the auteur add humanist or anthropomorphic intentions to this realism. The dignity of the work stems from the ease of filming things for what they are. Distance, like truth, is ensured. The shock provided by Michelangelo Frammartino’s Le Quattro Volte (2010) partakes of the same dynamic. Doesn’t its unanimous success have something to do with its refusal to give a conscience other than a utilitarian one to its animal-protagonists?

Colder and more cerebral, the Austrian Nikolaus Geyrhalter is a master in this search for distance that solely resonates in the conscience of the viewer, who is busy seeking out perspectives and judgments that suit him. Falsely detached from everything, the scenes offered in 2005’s Our Daily Bread (the transportation of pigs toward an uncertain outcome; hundreds of chicks propelled from one conveyor belt to another; a dehumanized and mechanized collection of seed for over-vitamined cattle) seem to say that the filmmaker’s point of view, while certainly there somewhere, has but a very secondary value.

Recently, two films seem to have even further erased the moorings and point-of-views of their auteurs. The negation of narrative, a resistance to spectacle, and a willful abandon toward purely visual and sonic itineraries force the America of Sweetgrass (2009) to live at a time and pace of shepherds, ranchers and other modern-day cowboys. More anthropological than anthropomorphic, this elegy owes its beauty to not being accountable to anyone. At times too in search of beautiful images, France’s Emmanuel Gras reveals the nobility of cows in Bovines (2011). Just cows! And do not expect to see or find signs attempting to clarify the intentions around this quiet visual adventure, which borders on reverence.

My most recent film, Bestiaire, grazes in the latter pastures. To confine the narrative to a duel? To flirt with the observational documentary? I won’t announce my conversion to the Church of James Benning but I must admit that I worked in reaction to many things. In reaction to the literariness of my last film, Curling (2010). In reaction to whatever we consider trendy; in reaction to entertainment, to anthropomorphism, and the informational. More generally, I also tackle things “by negation,” by telling an actor not to do such and such things without revealing to him or her exactly what I want; by whispering to my DOP “everything except for that.” Thus, the idea of Bestiaire naturally came from a series of constraints, of refusals, perhaps even from the negation of the idea of subject matter itself.

Bestiaire is therefore everything except “that”; a that to be defined, formed, and deformed. Falsely naïve, the project proposed itself as a will to look, to show without telling. I communicated a clear desire to my small production team: I want the equivalent of a bestiary or a sort of book of decontextualized images, candid ones stripped of any easy or facile interpretation. In short, something primitive and rudimentary that would intrigue a four-year-old boy. That would be nice, no? But it’s precisely in the clash with the public, with hunters of meaning and the chasers of messages that the adventure is most exciting. Because it has been said that the work of an artist is to be aware of a certain order of things. But what do we make of organisms who live in the nude? How do we assess the order of things, without judging, when it is destined for the entertaining purposes of a zoo? The refusal of an inquiry or the inquiry of refusal, Bestiaire is docile like an animal. It waits to be watched, named, and placed within the confines where we want to place it.

Posted in CS50, From The Magazine