Shelly Kraicer/50 Best FIlmmakers Under 50, CS50, From The Magazine 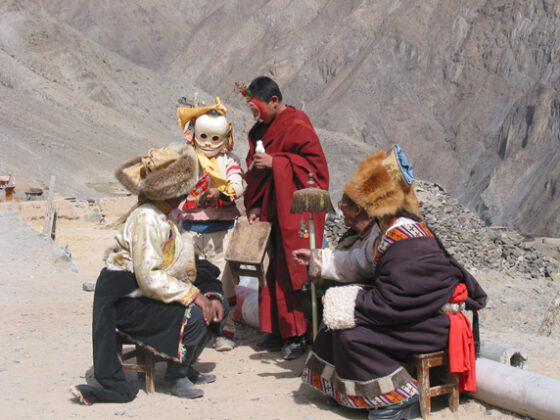 Pema Tseden himself considers it sad that only now, after one hundred years of cinema history, the first Tibetan filmmaker has emerged. But the first is already a master, with three brilliant features to date. Known also in Chinese as Wanma Caidan, Pema Tseden was born in 1969 in the Tibetan ethnic region of Amdo, in Qinghai province, China, to nomadic herder parents. He graduated as a mature student from the Beijing Film Academy in 2004, the year he shot his first feature The Silent Holy Stones. This film established his subsequent practice: his films’ dialogues are in a Tibetan dialect (with bits of Mandarin Chinese); he shoots with an entirely Tibetan crew and a non-professional Tibetan cast, in and around the Tibetan areas where he grew up. And he is the first director of Chinese nationality to do this. His subject is also consistent: the contemporary culture and life of Tibet, shot from within local society, a practice that consciously puts his films in deliberate contrast to the exoticizing fiction features about Tibet that have been produced by outsiders, both Chinese and foreign.

The Silent Holy Stones tells of a young monk who, coming home from his monastery for the holidays, becomes enraptured with TV serials of Buddhist stories, and tries to bring them back to his fellow monks. Against this background his village is performing the traditional Tibetan opera Drime Kunden—and this becomes the subject of Pema Tseden’s second feature The Search (2009). This film uses perfectly framed long takes, from a largely distant yet intimately engaged camera, to tell the story of a film crew driving around Tibet looking for actors to play in a filmed version of the opera. It wraps this quest around two concurrent love stories, and the whole becomes a masterpiece of understated emotional longing set against an urgent desire to preserve a disappearing culture. The subtle politics of the first two features comes somewhat more to the fore in the angry, almost despairing fable Old Dog (2011), in which an elderly Tibetan herder would rather kill his dog than see it sold to Chinese dealers for a fabulous price. Given Pema Tseden’s extremely complicated position as a Tibetan in China, and the necessity of having his films pass stringent Chinese censorship, his ability to speak eloquently of individual despair and the emergency of cultural obliteration is masterful; his ability to do this in films of such eloquent, quiet beauty is nothing short of astonishing.