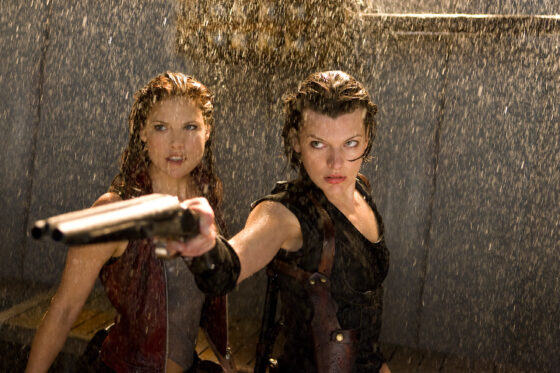 Long mainstream-despised as a videogame hack—although his case has been adopted by a handful of highbrow critics—Brit-born Paul W.S. is the elder, least pretentious, and most consistently amusing Anderson of the current director trifecta: its termite artisan. With the homegrown Newcastle juvenile-delinquent story Shopping (1994), he delivered a stylish calling card and a template for his future filmography: outsider resistance in the futuristic industrial wasteland of a malevolent, corporate-controlled world. But this nihilist crime drama also highlighted his weaknesses, still relying on social context and character development (vague), relationships (functional), and dialogue (pithy, often cheesy one-liners, punctuated by short bursts of unavoidable exposition). Anderson has since honed a no-nonsense B-picture approach somewhere between Castle and Carpenter: lean, yet visually handsome, formally achieved action pictures with the marketing gimmick provided by computer-game tie-ins or ridiculously upfront movie-combination pitches.

Although Anderson’s a proud purveyor of mostly analogue pleasures, the breakout success of his CGI-drenched, combat classic cine-transposition Mortal Kombat (1996) provided a template to fall back on after two ambitious, but flawed projects tanked: the eerily atmospheric, incoherent space horror Event Horizon (1998) and the Blade Runner “side-quel” Soldier (1998). Production problems led Anderson to reinvent himself as an auteur in the lower recesses of mainstream factory work, taking writer-director-producer credit on most films since the TV movie The Sight (2000). His eureka franchise came with Resident Evil (2002), its game-level structure a perfect fit for Anderson’s conception of modular filmmaking (his bits-and-pieces scripts depend on a strong, simplistic through-line to work) and knack for stunning set-pieces, while elevating Milla Jovovich from Bessonian L’Oréal model to bona-fide action icon. Anderson’s penchant for strong, leading women is one welcome trait—even his most interesting corporate villain is female: Joan Allen’s steely prison director in the superb retooling of Death Race (2007). Another is a nowadays rare gift for spatial continuity and consistency: Anderson attributes his love for cavernous spaces (underground lairs, waste planets, the impersonal corridors and halls of contemporary capitalist architecture) to his miner-family’s roots, and imbues them with a fascination worthy of Lang or Ulmer. In his masterpiece Resident Evil: Afterlife (2010), Anderson effortlessly transposed his stereo sense for in-depth staging to the third dimension for maximum impact. This also registers in the palatial rooms of The Three Musketeers (2011), a pure swashbuckler pleasure if you forgive its crude dialogues for its fantastic imagery, anchored around the colour-coordinated spectacle of the divine Milla as tough comedienne.